Below are the defensive player, play counts and participation chart for the Pittsburgh Steelers week 1 game against the Denver Broncos.

The play count totals do not include the no-play calls due to penalties.

Linebacker Jason Worilds saw action on both the left and right side in this game to spell both LaMarr Woodley and Chris Carter. Casey Hampton saw all of his snaps in the base 3-4 as the nose tackle while Steve McLendon saw snaps at the nose and 6 more in the nickel. Due to the substitution rotation needs, Al Woods saw 8 snaps and none of those came in the nickel. The Steelers were in their base defense on 36 of the plays charted. That is a result of the Broncos running 26 first down plays on the night. 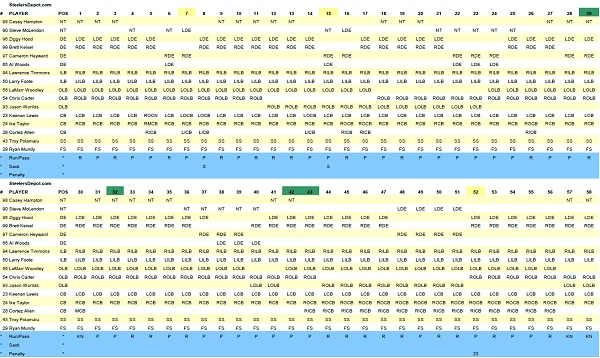