According to Phil Wilson of the Indianapolis Star on Twitter, Indianapolis Colts head coach Chuck Pagano said on Monday that it is up to league to decide whether or not Pittsburgh Steelers inside linebacker Larry Foote deserves punishment for his high hit in the head on wide receiver Austin Collie Sunday night.

The play in question happened about mid way through the first quarter as Collie attempted to catch a pass from Colts quarterback Andrew Luck. Initially Collie looked to have possession of the football, but he appeared to drop the ball after he was then sandwiched between cornerback Ike Taylor and Foote.

Replays show that Foote had lowered his right shoulder and forearm and he made contact with the helmet of Collie as he was going down. The play was reversed from a catch to an incomplete pass after Steelers head coach Mike Tomlin challenged the ruling on the field that the play resulted in a catch.

Collie stayed down on the field for a little while and had to leave the game to be checked for a concussion. He never returned to action.

On Thursday Collie was deemed day-to-day by Pagano, who added that the receiver will undergo several tests. Pagano did also say that Collie reportedly “felt good” when he showed up at the teams\’ facility on Monday.

The hit by Foote did not look egregious in nature, but regardless, it is more than likely that Foote will be fined as the league continues to send a message concerning any and all shots to the head on players. 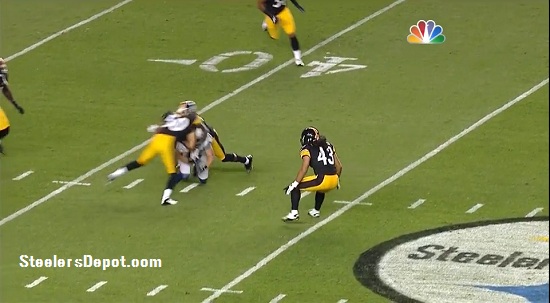