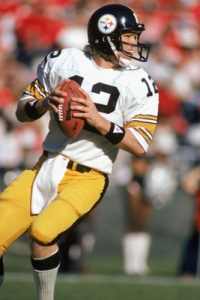 When news of veteran quarterback Terry Bradshaw\’s \’Big Toe\’ incident hit the news wire, people were about to pull their hair out. In late June, Bradshaw had been playing with his dogs on his ranch in Grand Cane, Louisiana. The end result: a fractured big toe on his left foot. Bradshaw was known, and still is, to be the kind of guy who liked to let his hair down, so to speak. In 1981, however, not everyone was impressed with his clowning.

His toe had to be placed in a splint and he was given strict instructions to remain off of the foot for three weeks by his physician. Apparently, he had struck the edge of a counter with the toe while chasing the dogs in his home. It was expected that Bradshaw would be able to perform at training camp when it opened in Latrobe on July 16.

Bradshaw told the Pittsburgh Post-Gazette, “I was trying to think up all kinds of excuses for (coach) Chuck Noll. But I guess the truth is best.” He went on to add, “I guess it\’s better to have it happen with a dog than in some bar.”

Further woes in 1981 for Steelers

Apparently, it wasn\’t just Bradshaw\’s toe that was injured that year. The Beaver County Times reported that training camp was abysmal. After missing the playoffs in 1980 with a 9-7 record due to player injuries, training camp and the 1981 season weren\’t any better (they finished 8-8 on the season).

Noll was quoted as saying (at camp), “Motivation has to be on our side this year. The strength of our team is the people we have, and we have players that have been working hard the entire off-season.” Noll, not used to losing, was being questioned by fans and the media as to whether he had what it took to get the Steelers back on top of the NFL or not.

The Steelers lost first round draft choice Keith Gary to a Canadian football team. Noll wasn\’t pleased and called Gary\’s exit from the Steelers Gary\’s loss. Sounding a bit jaded, Noll told the press, “I\’m not sure (Gary) would have added to our defensive line anyhow. He\’s still an unproven quantity as far as we\’re concerned.”

When asked about Bradshaw\’s toe, Noll said, “(Terry) only says it hurts when he runs the 350s.” Noll liked to have the players run 350-yard sprints after every practice, regardless of the heat and humidity. Most players hated the run.

Jon Kolb, the Steelers\’ left tackle missed nine games in 1980 due to a bum ankle and was expected to be in contention for his position (at camp) with Ray Pinney. Pinney had been selected in the second round of the 1976 NFL Draft. Pinney took Kolb\’s job and played in 11 games during the 1981 season, listed as the starter. Kolb, widely regarded as one of the strongest men in the NFL, retired after the season. He went out with four Super Bowl rings (1974,\’75, \’78, \’79) and his own fan-base called “Kolb\’s Kowboys”. After 15 seasons in the league, injuries that forced him to share time with Pinney and Ted Petersen (1980), Kolb hung up his cleats. Pinney was the Steelers\’ starting right tackle in Super Bowl XIII.

The biggest hole to fill in training camp that year was Rocky Bleier\’s. Bleier retired after the 1980 season and the Steelers needed to address who would handle the rushing duties. Franco Harris was already set at the fullback position, so the Steelers turned to their 11th pick in the 1980 draft, running back Frank Pollard. The 5\’10”, 218 pound former Baylor rusher was able to rush 123 times during the 1981 season for 570 yards and two touchdowns. He proved he could catch as well, handling 19 for 156 yards.

The end of an era

After amassing quite the Hall-of-Fame performance in the NFL, Joe Greene was mean no more after the 1981 season. His exodus was soon followed by: L.C. Greenwood (1981), Lynn Swann and Jack Ham (1982), Terry Bradshaw and Mel Blount (1983), Jack Lambert and Franco Harris (1984). It was the end of an era of champions in Pittsburgh black and gold.

The rallying cry in 1980 was “One for the thumb in \’81”. It was injuries, hard luck and age that took their toll on the four-time Super Bowl Champions. It was a dying dynasty. Noll tried desperately to get the Steelers back to the top by changing to a 3-4 defense, but the players\’ strike shortened the season and Pittsburgh managed a 6-3 record. The Steelers lost the playoff game 31-28 when Kellen Winslow of the San Diego Chargers caught two touchdowns in the final quarter.

Due to an elbow injury to Bradshaw, the Steelers relied on Cliff Stoudt to take snaps and manage the offense. The Steelers were streaky; seeing a roller-coaster season that somehow managed to come out in the in column (10-6 record) and make them the division title holders. Harris ran for 1,007 yards and Keith Willis recorded his career-best 13 sacks.

1984 – 1987 were desperate times for the Steelers. Rebuilding after losing their “golden boys”, Mark Malone and David Woodley shared quarterback duty. In 1984, Louis Lipps became the Offensive Rookie of the Year with a record of 45 receptions for 860 yards and nine touchdowns receiving. Listed as a punt returner, Lipps also had 53 returns for a 12.4 yard average and one touchdown. Tony Dungy coordinated the defense as they gave the San Francisco 49ers their only loss in 1984. The 49ers went on to win the Super Bowl. Despite highlight seasons from Lipps and Pollard, the Steelers continued to collapse. They finished the 1985 season 7-9. In 1986, Earnest Jackson came over from the Eagles to aid the offensive backfield, but the team only finished 6-10. Bubby Brister became the new quarterback in 1987, but the 1988 season was the worst in twenty years for the Steelers. Mike Webster was cut during the off-season and the Steelers saw the 80s slipping by with a 5-11 record (1988) and 9-7 record in 1989.

1989 did signal something of a resurgence and sense of urgency in Pittsburgh. When Gary Anderson kicked a 50-yard field goal in overtime in the wild-card playoff game against the Houston Oilers, Steelers fans felt hope. Jerry Glanville, Houston\’s coach, saw the highway. In the divisional game against Denver, John Elway sent the Steelers packing with a one point loss; 24-23.

(The source for the last was a combination of NFL stats from NFL.com, http://www.pro-football-reference.com and Steelers history pages)