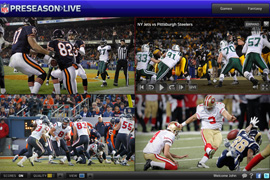 As of today there are just 18 more days until the Pittsburgh Steelers report to camp. There is also just 32 days until the Steelers first preseason game and 64 days until they kickoff the 2012 season in Denver. Preseason is right around the corner with 29 days until the Pro football Hall of Fame game is played in Canton that will feature the Arizona Cardinals against the New Orleans Saints.

If you live outside of Pittsburgh television market and want to watch the Steelers preseason games live, you can do so by ordering the NFL Preseason Live package now for just $19.99. With that subscription you also get access to not only all of the Steelers preseason games, but access to all of the preseason action around the league. This is great if you are a huge fantasy football player like I am and want to scout several players prior to your fantasy drafts.

When you order the NFL Preseason Live package, you not only get to watch the games live, but archived as well after they are played. The games are broadcast and archived in high-definition and can also be watched on your Android and iOS tablet devices with a free download of the NFL Preseason tablet app.

For archived games you have the ability to watch every play from an entire game, from opening kickoff to the final whistle, commercial free in roughly 30 minutes via the condensed game feature.

I have been a subscriber since the product was introduced and can\’t live without out. $19.99 is a great deal if you are a serious football fan like I am. I highly suggest you take advantage of the low early bird price right now before they decide to raise the price up to $29.99 like they did last year.