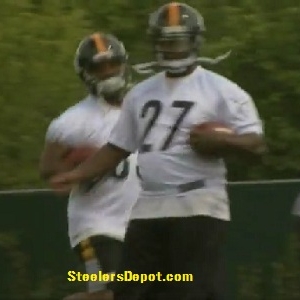 One of the concerns of Steeler Nation that seems to be surfacing coming out the Pittsburgh Steelers first OTA session this week is the weight of third year running back Jonathan Dwyer. His weight has been a concern of Steelers General Manger Kevin Colbert as well, who said back in late February on SiriusXM NFL Radio, “He\’s a big guy and you know sometimes he\’s a little too big quite honestly. He has to keep his weight in check, but he\’s 245 to 255 and he can run.”

Dwyer participated in the first two days of the OTA session this week and was excused Thursday so that he could attend his brother\’s high school graduation ceremony. Most of the fan base concern stems from the video shot of the day one practice that took place on Tuesday. I grabbed a still from that video that shows Dwyer to be a little thick around the middle.

Weight control is nothing new to Dwyer though as he admitted to showing up at training camp last year a little heavy, which led to him having to drop 15-20 pounds pretty fast. When asked about the extra weight he showed up with last summer, Dwyer said, “I was working out a lot right after last season. But then during the lockout, I rested my body and gained weight. The lockout was long, and I didn’t know when we’d come back. I just messed up.” When pressed further as to how he lost the weight he said, ““Just working, man. Working hard … doing extra work in the mornings during camp … running gassers after practice with the rest of the running backs … eating right and not eating after a certain time of day … keeping my calorie count down … just doing the right things. I’m losing weight every day. I’m back on the right track, and it is showing with the way I’m practicing and the way I’m playing.” Dwyer said at that time he was down to around 235-238 pounds.

This off-season has also presented another obstacle for the Georgia Tech product as he was recovering from surgery to repair a broken left foot he suffered late last season and he was not clear of rehab until early February. This of course prevented him from running for a good amount of time and that is certainly something he apparently needs to do keep his conditioning up and his weight down. Dwyer said back in April that his plans were to train with Tom Shaw during the the month of July, but those plans have since changed. He told us on the podcast a few weeks ago that the plan is now to train at Bommarito Performance Systems in Florida alongside teammates Antonio Brown and Lawrence Timmons. Dwyer said recently that ideally he would like to play at 225-230 pounds.

Training camp is still a good couple of months away and there are still two more OTA sessions and a mini camp that will take place over the course of the next three weeks. Following that Dwyer will still have a considerable amount of time to get his weight down. Until then I suggest we all hold off judging him until he reports to Latrobe for the start of training camp. Dwyer knows he has a great opportunity ahead of him to be the backup to Isaac Redman with Rashard Mendenhall likely to start the season on the PUP list. I fully expect he will photograph better at that time.