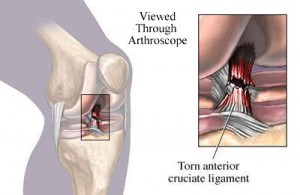 When you\’re a fan of football, the last thing you want to hear is that your favorite player has an injured or torn “ACL”.  You know it has something to do with their knee.  It becomes obvious when they roll up into a ball and grab their knee on the field.  You hold your breath and hope that the sideline reporter comes back with news that the knee was “tweaked”.  But when you hear that the player is going to have to have a CT scan or MRI…we know; you freak out.

Coming from an educational background in Sports Medicine (Exercise Physiology) and Psychology (emphasis in Sports Psychology), I thought it might be helpful to explain how rehabbing an ACL, especially a torn ACL, is undertaken in relation to players like Rashard Mendenhall, Casey Hampton and Baron Batch.

Recently, Batch wrote on his personal blog about his injury and the fact that he has been fully released from rehab.  During training camp in 2011, Batch tore his ACL.  It took him nearly 7 months to be able to post this:

The road to being fully cleared has had its bumps but it hasn\’t been the worst injury that I’ve had, and my previous injuries definitely prepared me on how to deal with this one from a rehab standpoint.

Because the ACL is one of four ligaments that are absolutely critical to stabilizing the knee joint, football players that make a lot of cuts or shuffling often suffer the most from this type of injury.  Ligaments control excessive motion in the knee joint, and of the four ligaments the ACL is the one most frequently injured.  The ACL ads stability to movements of the knee joint that affect angulation and rotation.  Because the knee is like a hinge rather than a ball-and-socket (ie. your shoulder), it is only meant to bend in one direction.

If you\’re old enough to remember Joe Thiesmann playing quarterback for the Washington Redskins, then you may have seen the hit by Lawrence Taylor that ended Thiesmann\’s career.   Thiesmann was attempting a “flea-flicker”, but L.T. wasn\’t fooled.    When Taylor pulled Thiesmann to the ground, his knee drove Thiesmann\’s lower right leg down as well.  While Thiesmann didn\’t suffer an ACL tear, he did experience a twisting effect on his leg that caused fractures in both the small bones in his leg (the tibia and fibula).  The injury became one of the NFL\’s “Most Shocking Moments in History” in an ESPN poll.

When Hampton and Mendenhall were both sidelined during the 2011 season, it was evident from game footage that both players experienced a “torque” effect on their knees.  This may all seem academic, but the question is often asked as to how long it takes to recover from such an injury.  When Kevin Colbert said that it would take time…he wasn\’t making excuses by any means.

Standard ACL rehab usually takes between seven to nine months to complete.  Standard procedure is that the ligament (and leg) be rehabbed and rested for six months minimum.   You will often hear that some athletes make a “fast recovery” compared to others.  This is because some athletes have less serious injuries than others, some require more than one surgery to repair the tear to the ligament or grafting and some athletes rehab better because they\’ve either had a previous injury or they have a good training staff that know how to motivate them to make the most of their healing time.  If the ACL damage is more serious, rehab could take an entire season or require the player end their career.

During the reconstruction surgery, a new ligament is created and held in place with surgical screws or surgical fixation devices.  The ligament must heal in the proper position if it is to once again withstand repetitive stress.  If the graft method is stressed before the ligament has completely healed, the fixation will fail.  If rehabilitation is accelerated at too great a pace, it can also re-injure the knee or damage the kneecap or leg bones.

Jerry Rice was known to have made a miraculous comeback a mere 3 1/2 months after having ACL reconstruction in 1997.  In his very first game after being cleared, Rice fractured his kneecap (the spot where the ACL graft was taken from) and the new injury ended his season.

ACL rehabilitation involves a long process of therapy and sports-specific activities.  You can read more from Batch\’s online blog to see that he took the time he needed, worked with trainers and made sure to do activities that would strengthen his knee.  He still says he is only “90%”.  His biggest issue right now is making sure that while he knows he can run faster going forward, he will have to work more on “cutting” during running, which puts strain on an already healing ligament.

Orthopedic doctors, trainers and rehab specialists gauge progress for every athlete that undergoes an ACL repair.  If the player isn\’t able to complete certain activities, they often must work with physical therapists to move at a slower pace.  Each player needs individual treatment specific to their own bodies.

A common question I am asked is, “What do they do to rehab and get better.”  While I can\’t speak for each and every individual player who has had an ACL injury, I can say that icing, elevation and eliminating pressure (ie. using crutches) are usually the first steps.  Within the first couple of weeks, range of motion exercises are important to help the player gain the ability to reach the full extension of their knee (straightening their leg).  Bending the knee is easier at this time than flattening the knee out is.  This is similar to the type of exercise and rehab people who have full knee replacements receive.  The player must learn to walk correctly, strengthen the thigh muscles, and add normal motion to the knee.  When they meet those benchmarks, balance and some sports-specific activities are added only if the swelling in their knee has been eliminated.  Pivoting is a big no-no, as are side-to-side movements.  Often the most frustrating and difficult part of rehab is when the players say their knee “feels normal”, when in fact it is not yet ready to handle the every-day stresses, let alone the stresses their sport places on the weak area.

Mendenhall and Batch, as running backs, require the ability to side-step and cut, especially at the line of scrimmage.  Hampton, as a defensive lineman, also needs to ability to push while side-stepping.  Hampton has already had two surgeries on the injured knee, but also has experience behind him because he has gone through the rigors of rehab previously.  While the three players work out physically, there is also a psychological aspect involved as well.  If a player gets frustrated that they aren\’t progressing fast enough, they might return to the game too soon and re-injure themselves.  They may also feel down because they aren\’t able to be as active as they were pre-injury.  A positive outlook and patience, however, usually results in better recovery times and a better chance of not re-injuring themselves.

Colbert expects that Mendenhall and Hampton will begin the 2012 season on the physically unable to perform (PUP) list.  He told the Pittsburgh Tribune-Review, “To clarify, what I said was I never think players coming off an ACL are 100 percent for a full year.  It doesn\’t mean they can\’t play. ”  He then stated that he was confident that Mendenhall will, at some point, play during the 2012 season.  When asked about Hampton, Colbert said Hampton plays “a different position obviously.  You don\’t have to worry about speed, you don\’t have to worry about quick change of direction…and the one edge Casey will have on anybody is that he\’s been through this twice…He knows how much work he has to do and he knows how he feels.”

While Mendenhall heals, the Steelers will most-likely make good use of Batch during training camp.  And although the Steelers say they\’d like Hampton back in 2012, he likely could watch the start of 2012 from the sidelines.  Regardless, the way the Steelers organization have handled injuries like ACL tears shows that they are smart about the amount of pressure they put on players to return to the field.  They want them healthy and 100%.  That is a sign of a good organization.