“A small body of determined spirits fired by an unquenchable faith in their mission can alter the course of history.” – Mohandas Gandhi 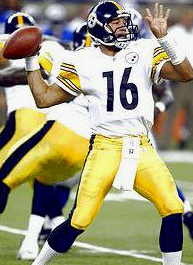 Charlie Batch re-signed with the Steelers three years ago, returning as a backup behind Ben Roethlisberger. He signed a one-year contract worth $895,000 with an additional $50,000 signing bonus.

What is interesting is that history seems to be repeating itself here. On Monday of this year (2012), Batch once again re-signed with the Steelers; a one-year contract. What are the odds that the organization would get Charlie back on the same day of the month of April? My theory – Batch\’s number is “16”, and maybe he is superstitious about the number. Regardless, Batch has a good history with the organization as a leader and a backup quarterback. He is joined on the pre-draft roster (of quarterbacks) with Troy Smith and Jerrod Johnson.

It\’s the story that every Steelers fan wishes would go away. In a way, it has. In other ways, it caused a major disruption of loyalty among the Steelers Nation ranks.

Roger Goodell told ESPN Radio that “there has been a violation” of NFL policies in the case of Roethlisberger after he had been accused of sexual assault by a 20-year-old college student at a Georgia nightclub in March of 2010. It followed an incident by another woman who claimed that Roethlisberger sexually assaulted her in 2008 at a Lake Tahoe hotel-casino. In both cases Roethlisberger denied the assault allegations.

In what would end up a trial by media and fans outside of the justice system, Roethlisberger found himself personally attacked and threatened by football faithfuls and the Commissioner suspended the quarterback for the first four games of the 2010 season. Steelers fans felt torn between the love for and loyalty to their star quarterback and the severity of the claims against him. The media storm became increasingly heated.

The Ocmulgee district attorney, Fred Bright, said that the alleged sexual assault in the Milledgeville, Georia, nightclub couldn\’t be proven as such. Roethlisberger admitted that he had “sexual contact” with the woman, but that it was consensual. The NFL took a hard stance regardless of the legal judgement and made Roethlisberger the poster boy for misconduct.

The investigation process in Georgia has been deliberate and the District Attorney\’s decision regarding Ben Roethlisberger speaks for itself. During the past few weeks I have met with Ben on a number of occasions, not only to discuss this incident, but also to discuss his commitment to making sure something like this never happens again.

The Pittsburgh Steelers take the conduct of players and staff very seriously. Ben will now have to work hard to earn back the respect and trust of Steelers fans, and to live up to the leadership responsibilities we all expect of him. In the coming days Ben will meet with Commissioner Goodell to discuss his resolve to abide by the league\’s personal conduct standards. After consultation with the Commissioner, our organization will determine the next steps in this process.

Goodell told ESPN, “You do not have to be convicted or even charged with a crime to be able to demonstrate that you\’ve violated a personal conduct policy.”

Many Steelers fans were outraged that Roethlisberger was singled-out considering serious crimes that had been committed over the years by other NFL players who were not suspended.

In January of 2010, San Francisco 49ers cornerback Eric Green faced a lawsuit of $10 million dollars for sexual assault on Angelina Mavilia, a transgendered female. According to reports at the time, Green threatened the woman if she revealed the assault. No information could be found that Green was penalized by the NFL. Green is now retired.

In December of 2010, Denver Broncos rookie cornerback Perrish Cox was arrested in Colorado following an investigation into an alleged sexual assault that took place on Oct. 28 in Lone Tree, Colorado. Cox was allowed to leave the state of Colorado to play in the Broncos game against the Arizona Cardinals. In fact, Commissioner Goodell allowed Cox to play. The Broncos fined Cox (an undisclosed amount) and then waved him in 2011. On March 13, 2012, Cox was signed as a free agent by the San Francisco 49ers to a two-year contract. No suspension was ever handed down by the league.

In June of 2000, Baltimore Ravens linebacker Ray Lewis pled guilty to a misdemeanor obstruction of justice to avoid murder charges. Judge Alice D. Bonner sentenced Lewis to 12 months of probation. In a plea agreement, Lewis testified against his two co-defendants, Reginald Oakley and Joseph Sweeting. A Janurary 31st street fight left two men dead of knife wounds. Sports Illustrated reported that Lewis would most-likely not be suspended by the NFL, but could likely be fined. Ravens coach, Art Modell, said that he welcomed Lewis back to minicamp the following week. Paul Tagliabue, the NFL Commissioner at the time, said in an official statement,

Today\’s developments will help put this tragic incident behind us. Ray Lewis has been entirely cleared of the charge that he was responsible for the loss of life that occurred in Atlanta in late January.

It isn\’t difficult to find other players who are in hot water, or who have been. In fact, one blogger keeps track of crimes committed by NFL players.

Regardless, Roethlisberger took responsibility for embarrassing himself, the Steelers and the league. He also publicly apologized. That is more than can be said of many other NFL players.

Time to put this piece of Steelers history to rest.