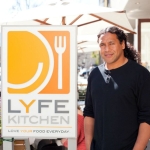 Troy Polamalu a fast food cook? No, but the Pittsburgh Steelers all-everything strong safety is now in the fast food business, but it is healthy fast food. Polamalu is a part owner in a new restaurant in Palo Alto, California called LYFE Kitchen, and it\’s a healthy fast food restaurant that was the brain child of Polamalu himself.

Polamalu was interviewed by Gary Radnich of KRON 4 News in San Francisco on Friday to talk a little about his role in the restaurant that started as an idea of his. Radnich asked Polamalu about how he got involved with LYFE Kitchen and Polamalu said, “Actually it was an original idea that I had. Obviously playing professional sports you want to eat healthy and take care of your body. Well I wanted something that was fast food, that was cheap and that was really healthy. I came up with this idea, obviously I don\’t have the means or the business mind to start my own, but at the same time these guys from LYFE Kitchen were starting this idea and we teamed up and we have this restaurant.”

Looking at the menu you can see that it is indeed healthy as dishes on the menu include vegan and gluten free choices, and all of the menu items come in recommended portion sizes that contain less that 600 calories and less than 1,000 mg of sodium. The restaurant has a wide variety of menu choices for breakfast, lunch and dinner as well.

Polamalu is not the only name that you might recognize that is associated with the restaurant, as Thomas Tull, the Chairman and CEO of Legendary Pictures and Steelers part-owner, is also listed as a member of the restaurants board.

The restaurant reportedly opened October 12th of 2011 and you can visit their website at lyfekitchen.com as well as their Facebook page, where you will find several pictures of Polamalu patronizing his establishment.

Former Steelers head coach Chuck Noll used to always preach to players about being prepared for their life\’s work after football. I am sure he would be proud of Polamalu\’s life work during his football career and would approve of Polamalu\’s Lyfe Kitchen as well.