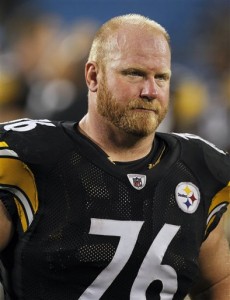 When it was announced that Chris Hoke, a two-time Super Bowl champion and 10-year veteran with the Steelers was being moved to the injured reserve list, it was disappointing but there was hope that he\’d be able to get back on track and find his way back onto the field. Hoke had been relegated to third string behind Ziggy Hood and Steve McClendon, but has seen time on the field this season. As a nose tackle for the Steelers, Hoke has seen a lot of success, but it appears that his neck injury is serious enough that #76 will require surgery and may not only be out for the rest of the season, but see his NFL career come to an end.

Hoke spent the 2001 and 2002 seasons on the practice squad for the Steelers and most of the 2002 and 2003 seasons inactive. Filling in for Casey Hampton in 2004, Hoke started the final ten regular-season games. That year he played in his first Divisional Championship. In 2007, Hoke signed an offseason four-year contract that would keep him with the team through the 2010 season.

Hoke\’s stats include:
114 games, 83 total tackles (52 solo) and 2 sacks. While the big man may not have been the flashiest player in black and gold, he played with tenacity at the position.

Covering Hoke\’s career as a sports writer has been an exciting time for me. To find out that someone I can relate to as a member of the same church, a fellow BYU alumnus, and a man whose heart is solid gold has found the end of their career on the field comes with mixed emotions. Hoke will be missed in the locker room, especially by Steve McLendon. 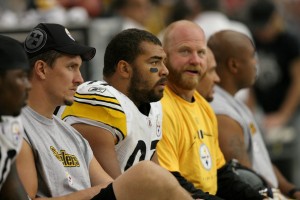 McLendon told Jim Wexell of SteelCityInsider.net that Hoke has been a mentor to him. “[Chris] took everything that the coaches gave him and he passed it along to me…today was one of the (pause) toughest days for me, because I\’m in the meeting room and he\’s not here.”

According to inside sources with the Steelers, Hoke will undergo a \’neck fusion\’ surgery which is similar to the operation that Aaron Smith had earlier this season. The combinations of \’stingers\’ caught up with Hoke until it became obvious that there was something more serious than muscle and nerve pain.
The procedure isn\’t a pleasant one, and Aaron Smith has shared his experiences. The fact that Smith is still recovering from his surgery and Hoke is now getting ready for it signals that the two men may be on their way into Steelers history books and on to bigger things in life.