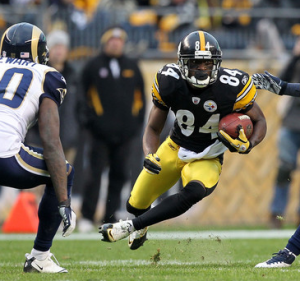 For a guy who didn\’t start the Christmas Eve game against the St. Louis Rams, Antonio Brown made a statement during the 27-0 Steelers shutout. The Steelers opened the game running an offensive scheme that relied heavily on the ground with running back Rashard Mendenhall, Hines Ward at receiver, a three tight end set. When Brown did enter the game he set a new record for the Steelers franchise by passing former Steelers running back Barry Foster\’s 2,034 all-purpose yards.

The record has stood since 1992, and Brown, who came into the game with 984 receiving yards for the season, was ecstatic to find out that he\’d sit atop the franchise in that position. After adding 77 all-purpose yards in the Steelers\’ victory, Brown said, “I play for one of the greatest organizations. To have something like that, it\’s special.” Brown\’s total all-purpose yards with one final regular season game ahead of him now stands at 2,048. Brown finished the game Saturday with 34 receiving yards, eight rushing yards, five yards on punt returns and a big 30 yards on kickoff returns. When asked about the record, Brown said, “I had no idea…I knew I was close to 1,000 yards receiving. That’s what I was kind of thinking about.”

His season stats are:

Interestingly enough for a wide receiver, Brown added two tackles during the game. One came after Charlie Batch threw an interception to the Rams\’ Josh Gordy. The second came when the Rams tried to fake a punt with a little over 13 minutes left in the second quarter with the Steelers leading 3-0. The Steelers covered all potential receivers when the Rams lined up for the play in Steelers territory. Punter Donnie Jones of the Rams had no one to throw the ball to and was forced to run. Brown met him with force and kept him a mere one-yard shy of the first down. Brown told the media that when the ball was snapped he saw that Jones appeared to be holding the ball for a pass instead of a punt, and Brown ran in from nearly forty yards deep to keep the Rams from advancing.

In his second season, Brown has been impressive. With big-play capabilities, it\’s a sure bet that Brown will be a big factor during the Steelers\’ post-season in 2011.