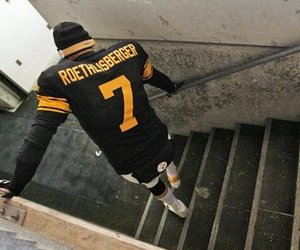 11 days ago:Pittsburgh Steelers quarterback Ben Roethlisberger limps down the steps to the locker room after the Steelers' 14-3 win over the Cleveland Browns in an NFL football game in Pittsburgh, Thursday, Dec. 8, 2011. Roethlisberger injured his left ankle in the second quarter but returned for the second half. (AP Photo/Gene J. Puskar)

There is absolutely no doubt that Ben Roethlisberger is a champion in his heart and that he wanted to lead his team to a win against the San Francisco 49ers on Monday Night Football on ESPN regardless of not being 100 percent. The thing about his high ankle sprain is that it is going to take time to heal…and Ben\’s 10 day layoff clearly wasn\’t enough time. That isn\’t to take anything away from Roethlisberger\’s play Monday, but it does leave questions open about whether or not the Steelers should have convinced Ben that Charlie Batch should take the field at quarterback.

Tomlin defended his decision to allow Roethlisberger to play in his post-game press conference, saying that Roethlisberger was deemed healthy enough to play. Tomlin also didn\’t seem affected by the fact that Roethlisberger saw the turf more than a few times, mainly due to an offensive line that was overwhelmed by a strong pass rush by the Niners.

Monday night\’s game became painful to watch after a while, not because the Steelers were getting beat, but because every time Roethlisberger went down it made fans hold their breaths. He looked strong at times, and then other times it was obvious he wasn\’t able to plant his injured ankle enough to get his normal zip on his passes.

By the third quarter, Steelers fans on Facebook were already asking if Ben had had enough and whether it might not be a good idea to send Charlie Batch in and let Ben take a breather. By the fourth quarter, regardless of how much Roethlisberger wanted to play, it may have been a smart move. 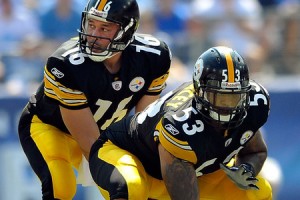 Quarterback Charlie Batch #16 of the Pittsburgh Steelers takes over for an injured Dennis Dixon #10 against the Tennessee Titans during the first half at LP Field on September 19 2010 in Nashville Tennessee.

Batch was a more than capable starting quarterback in the beginning of the 2010 season while Roethlisberger served his four game suspension. In three games, Batch went 29/49 passing for 352 yards. He was susceptible to sacks (being dropped four times). He also threw three interceptions. Batch had an extra pep; his ability to use his legs. Batch ran for 30 yards on 7 tries. Batch also notched three touchdowns. Some may argue that Batch helped get the Steelers on track early to their eventual showdown in Super Bowl XLV while Roethlisberger prepared to get back in and lead the team.

With less time to prepare and an obviously unstable ankle, the question now is whether or not Roethlisberger will be ready to play the final two games of the 2011 regular season. The Steelers will face the St. Louis Rams and the Cleveland Browns, two teams on the skids. Batch may be the answer the Steelers need to get Roethlisberger healthy for a shot in the post-season. Although Batch isn\’t the youngest quarterback in the NFL, he has an ability that Roethlisberger doesn\’t right now; the ability to run in order to avoid the defensive rush.

Leave the coaching decisions to Mike Tomlin, but don\’t be shocked if you see Charlie Batch start the next game and give it his best shot. He\’ll have all week to prepare with the first team.

Kudos for Roethlisberger\’s gritty, gutty performance in the Steelers\’ loss to the Niners, but the Steelers want the last two games to be wins and that may mean bringing Batch off the bench to seal the deal.