Below are the offensive personnel packages, play counts and participation chart for the Steelers week 10 Sunday win against the Cincinnati Bengals.

The big story making the rounds after the game is the lack of playing time that Hines Ward received. We have him playing 9 non-penalty snaps. Antonio Brown and Jerricho Cotchery both benefited from Ward being limited as Brown saw 46 snaps while Cotchery saw the field for 35 plays.

The Steelers used at least 2 or more tight ends in various formations on 30 of the 65 meaningful plays. Trai Essex saw 1 snap at fullback instead of Doug Legursky. Jonathan Scott filled in for Max Starks for 1 non-penalty play after Starks left briefly with a stinger. 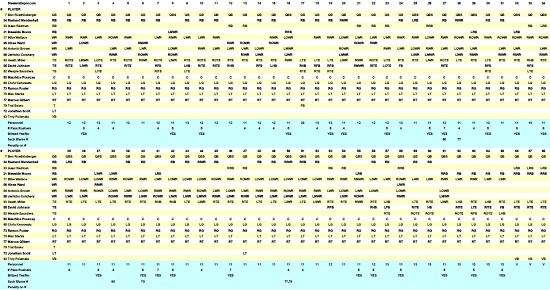