I detailed the hits by both Clark and Lewis last night, but it was not until tonight that I decided to go back and look at the tape again to see the hit that Schefter was referencing in his report. The hit in question happened with 8:36 left in the third quarter after Ravens running back Ray Rice caught a short pass over the middle from quarterback Joe Flacco. Steelers linebacker Larry Foote tackled Rice right after the catch and immediately after hitting the ground, Harrison dove in and hit Rice helmet-to-helmet.

After the hit, it looked like both Rice and Ravens right tackle Michael Oher both took exception to the hit, but the players were quickly separated and play resumed. Harrison was not flagged on the play.

Heading into the game last night, the Steelers have had 10 different players fined this season for a total of $142,500. If indeed Clark and Harrison are fined, it will be the second time in as many weeks for Clark and the first time this season for Harrison.

You can see a screenshot picture of the Harrison hit on Rice below. 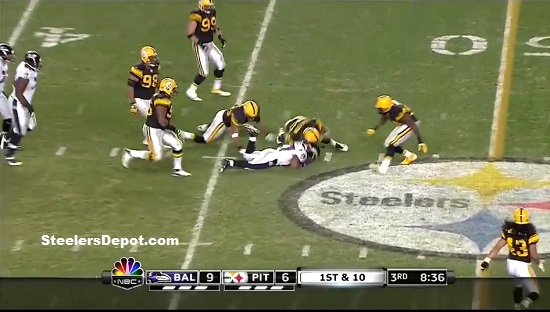