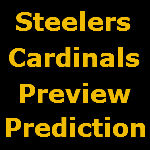 The Steelers head out west this week to take on the Arizona Cardinals after skating past the lowly Jaguars last week at home. Several key players remain out in Casey Hampton and James Harrison. Doug Legursky is also now sidelined in addition with a dislocated toe. The offense needs to keep their foot on the gas this week and the defense just needs to keep up what they have been doing the last few weeks. As I do each and every week, here are my 7 things to watch for this week against the Cardinals as the Steelers look to move to 5-2 on the season and come back home to Pittsburgh for their tough match-ups against the Patriots and the Ravens. At the bottom is my score prediction for the game and I will have my week 7 picks and predictions up for the other games later tonight.

Beanie Capped – Cardinals running back Beanie Wells is a very strong north-south runner who has amassed 381 yards rushing in 5 games this season for a 4.8 yards per carry average. The Cardinals look to pound him early and often between the tackles and attack young nose tackle Steve McLendon, who likely will make his first career start Sunday. Wells is not a shifty back, so it is up to the Steelers defensive line and linebackers to stay solid in gap control and wrap him up on first contact. The Cardinals hope to force the Steelers into bringing an extra man down in the box to help defend against the run to open up the deep passing game. The number one key this week, like most weeks, is to shut down the run and force the Cardinals into obvious 3rd and long passing situations.

Collapse The Pocket – If the Steelers are able to get the Cardinals in obvious passing situations, the defense must press and collapse the pocket on quarterback Kevin Kolb. He is still not completely settled in with the new offense and has made some very poor decisions when under duress. Making him get rid of the ball early because of pressure is the Steelers best chance at getting a few well needed turnovers this week. The play of the Cardinals tackles has not been great this season and Daryn Colledge has given up quite a few pressures inside at left guard. He and left tackle Levi Brown have combined to give up over 30 pressures through the first 5 games.

Attack The Secondary – The Cardinals will be without starting free safety Kerry Rhodes after he broke his foot against the Vikings so 3rd year safety Rashad Johnson now gets thrust into the lineup. The Cardinals have already given up a tremendous amount of explosive plays through the air thus far this season as rookie Patrick Peterson is still trying to adjust to the NFL and the 3-4 defense. A.J. Jefferson has been up and down this year in coverage on the other side and very well could be the one saddled with the job of covering Mike Wallace this week, with help over top from Johnson. This would mean that Hines Ward, Emmanuel Sanders and Antonio Brown should have some opportunities to make some plays this week. Ben Roethlisberger has struggled with accuracy at times on his deeper balls this season and he will likely not have the wind to blame this week. He needs to hit these big plays as they should be there for the taking.

Worilds World? – All eyes will be on Jason Worilds this week if he dresses on Sunday. Worilds has missed the last two games due to a quad injury and also missed a golden opportunity to show what he can do full time at right outside linebacker with Harrison sidelined. Lawrence Timmons has played outside instead and has not been very effective at stopping the run or rushing the passer there. Timmons is much better suited inside at his normal spot and Worilds ability to rush the passer could be just what the Steelers need this week. If Worilds is active and does not start, it may tell you what the Steelers think of the progress of the second year, second round draft pick. It is time to see what he has and hopefully he makes a difference.

Early On 3rd – While I do not want to downplay how crucial it is to contain Cardinals wide receiver Larry Fitzgerald, Early Doucet could be a bigger player to control on 3rd downs as he leads all receivers this year with 13, 3rd down catches for 214 yards and has moved the chains 10 times. That equates to a 16.5 yards per catch. He will likely draw William Gay in coverage depending on where he lines up.

Counter Piking & Running Right – The Steelers get back left guard Chris Kemoeatu this week and his ability to pull and finish on the counter pike play the Steelers love to run might be crucial in this game as the Cardinals have not been good against runs to the right. They are allowing an average gain of 7.29 yards on runs to right guard, 4.29 on right tackle runs and 5.47 yards on right end runs. The Steelers are a heavy right handed run team so Ramon Foster, Marcus Gilbert and both tight ends will be counted on to control that side in the run game.

Fried Suishi? – Shaun Suisham has been less than spectacular this season as he is just 6 of 10 on field goal tries through the first 6 weeks. Outside of 30 yards he is 3 of 7 and has not attempted one of 50 yards or more. This has to stop before it cost the Steelers a game at the end and hopefully it will not come down to needing him to drill one for the win this week. If it does, he better nail it or he could be hitting the road soon. Nearly 52% of his kickoffs have been returned this year and he has just 13 touchbacks in 27 kicks.

Steelers Cardinals Game Prediction – The Steelers should have steam rolled the Jaguars last week, but the offense took the second half off. The defense still is not totally sound against the run, despite their overall number one defensive ranking and they have only produced 2 turnovers through 6 games. The Cardinals are a team in transition right now and have yet to put together a complete game. The Steelers are not in transition and they too have yet to put together a complete game this year and have had problems on the road. These two teams know each other schematically, so I think it is a wash there. With the Patriots and Ravens on the horizon, this is the game they need to put everything together in. I think they will and a late Cardinals garbage touchdown will make it look closer than it actually was.