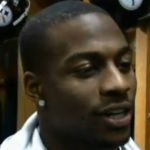 It does not take a rocket scientist to figure out that the Steelers have big concerns right now about the feet of second year wide receiver Emmanuel Sanders. Sanders broke his right foot in the team’s loss to Green Bay in the Super Bowl and then had another surgery on his left foot in the spring after he developed a stress fracture in it. The left foot still had not healed properly when he arrived at training camp and he had a procedure done that consisted of injecting bone marrow and calcium into his foot to help promote healing.

Sanders was slated to be the Steelers number 3 wide receiver this year after a great rookie year and he progressed so fast that he overtook veteran Antwaan Randle El on the depth chart half way through last season. He was poised to make a huge jump this year as not only did he show his ability to pick up the offense, his routes were crisp, his recognition was noticeable and he proved he was a willing and able blocker when the play called for it.

I noted a few times over the offseason that I was concerned about the feet of Sanders. Before the draft is when I threw out my initial concern and followed it up with a deeper concern in late May after he announced his second surgery. The Steelers concern is now evident as they brought in former Steelers receiver Plaxico Burress at the start of camp and now former Jets receiver Jerricho Cotchery is visiting today. Both of these players are third receiver material and no way would they be garnering attention from the Steelers right now if they truly thought Sanders would be ready by the time the season started.

Antonio Brown has had a great start of training camp, but he has yet to make his mark like Sanders did last year, outside of his amazing catch against the Ravens in the playoffs. Brown has ability, but his recognition and blocking skills are way behind that of Sanders when the season ended. Brown is more in the mold of a Mike Wallace then he is that of Sanders and veteran Hines Ward and the Steelers would be taking a huge risk with him being the week 1 third receiver. Them looking at Burress and Cotchery also confirm this fact. It is not that they think he can\’t handle the spot, they just need to be prepared if he can\’t.

It is no secret that the Steelers do not have a lot of cap room to work with right now and the Burress demands were just too high for them. He wanted a strong one-year deal more than likely to show he is worthy of a big payday after the 2011 season and it was too risky for the Steelers to pay that price just in case he might be past his prime. As I write this there is still no word on Cotchery coming to terms, but he was scheduled to earn a base of $1.8 million with Jets this year prior to being released and was slated to count $4 million against their cap. He comes with concerns as well as he had back surgery in February to correct a herniated disk and was placed on the Jets active PUP list at the start of their camp prior to his release. His health and his price tag will be big factors in the decision of whether or not he is signed.

The worst thing the Steelers can do right now is to rush Sanders along. Although the prognosis was three weeks, it would surprise me if he was ready by week 1 against the Ravens. I hope I am wrong, but regardless if I am or not, they need insurance and I fully expect the Steelers to get some over the course of this week. It could be Cotchery or it could be another free agent receiver still floating around. We should get the answer very soon and in the mean time, pray for a complete recovery of Sanders. He certainly looks promising if those feet can heal.