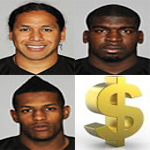 Last week I posted about the Steelers likely course of action they will take in regards to getting linebacker LaMarr Woodley extended and the chore of getting under the salary cap whenever the lockout is over and a new labor agreement is reached. Today I will look past that point and concentrate on three key players that are about to enter their final year under contract and how the Steelers may approach each situation going forward.

Safety Troy Polamalu, linebacker Lawrence Timmons and wide receiver Mike Wallace are the next high profile players that the Steelers will need to start focusing after the 2011 season cap needs and free agency issues are dealt with. Below is a player by player look at the situation of all three players in question.

Troy Polamalu – Back in July of 2007 Polamalu signed a four-year contract extension worth $30.19 million that at the time made him the highest-paid player in Steelers team history and also one of the top-paid defensive backs in league. At the time, Polamalu said he did not expect to want to take off four years from then and was quoted as saying, “I didn\’t want to be a player who is jumping from team to team. I\’ve always felt comfortable here, I think this organization, this tradition they have here, is very legendary and I always wanted to be part of this.” Needless to say, I think the Steelers feel the same way and want him to end his career in the black and gold if at all possible.

Troy is scheduled to count a little over $8.5 million against the salary cap in 2011 according to my numbers and as I mentioned last week, the Steelers might want to get him extended prior to the start of the season in order to lock him up now and attempt to maybe lower his 2011 cap charge in the process. There is no guarantee though that will be the course of action for the Steelers, but it certainly makes sense to do now. Polamalu surely will want to be one of, if not the highest paid safeties in the league so you can bet a new deal will break down higher than the one Chiefs safety Eric Berry signed after he was drafted 5th overall in the 2010 draft. The six year deal Berry signed was worth a maximum of around $60 million, of which around $34 million is guaranteed and it made him the highest-paid safety in history. The guaranteed money should be looked at the most in the Berry deal, as the rest likely consists of roster bonuses and to be earned incentives and the final year is also voidable. It is hard to guess what Troy will need to be locked up for 3 or 4 more years, but one could guess around $10 million a year as a starting point including bonuses. Just a guess mind you.

The other option would be to let Troy play out his final year and place the franchise tag on him as that tag looks to carry over in the new CBA. They could then work on a new deal after that, much like they are doing this upcoming season with Woodley. The only drawback is that if indeed teams are only given one franchise tag, the Steelers will want to have a new deal in place with Timmons by then. The transition tag, should it also carry over, might also be an option for Troy, but I do not think the Steelers will want to go that way and possibly expose him to a poison pill type situation.

Lawrence Timmons – Heading into the final year of his 5-year rookie contract, Timmons has a modest 2011 cap charge of nearly $3 million and is the player most likely to wear the Steelers franchise tag next offseason, much like Woodley wore it this offseason. At the very least it would guarantee he returns for the 2012 season and it will buy the Steelers time to free up some money and then extend him prior to the start of the season. The Steelers thrive on the play of their linebackers and with the chance 2011 could be the last season for James Farrior in Pittsburgh, I can not see them letting him reach free agency untagged, as long as his quality of play remains the same and he does not suffer a career threatening injury this upcoming season.

The transition tag I mentioned above with Polamalu might be at the Steelers disposal as well, but also like Polamalu, I do not see them using it on Timmons unless the parameters change with that particular tag. That should not be taken as a guarantee though should they still not have Polamalu locked up by that time. The Steelers could be in a situation were either Troy or Lawrence receives the franchise tag and the other receivers the transition tag. I just can not seeing that happening this far out, but it is worth noting as an option.

Mike Wallace – The situation is a bit easier with Wallace assuming that players with just 3 years of accrued service time are still regarded as restricted free agents in the new labor agreement. Wallace made a huge leap last season and looks to improve even more in his 3rd year in the league. The likeliest course of action the Steelers will take with him is to tender him at the highest level a restricted free agent can be tendered at. This would mean the Steelers would pay Wallace a 2012 salary of likely around $3.5 million or slightly more and would receive a first and third round draft pick in 2013 should Wallace end up signing elsewhere during free agency. This would almost certainly scare teams away from going after him in free agency and would reward Wallace for his play during his first three seasons in Pittsburgh.

The ultimate decision to extend him, tag him or let him walk could then be put off until the after the 2012 season. The only thing the Steelers really have to worry about is Wallace possibly holding out for a new deal prior to the start of the 2012 season, because he thinks he has earned the right to a new long-term deal and not satisfied with the tender amount placed on him.