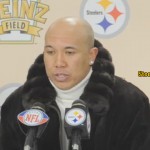 As many know by now, Steelers wide receiver Hines Ward was arrested early this morning for suspicion of driving under the influence of alcohol in Dekalb County, Georgia. Ward bonded out and is expected to release a statement later on today. Ward\’s manager told TMZ this afternoon, “He cooperated fully with the police and truthfully answered all of their questions. We are currently in the process of ascertaining all the facts. From our preliminary investigation we can tell you that we are confident that the facts will show that Hines was NOT impaired by alcohol while driving.” He went on to say, “However, Hines is deeply saddened by this incident and apologizes to his fans and the Steelers organization for this distraction.”

The biggest question now on everyone’s mind is what sort of punishment or suspension will Ward face from Commissioner Roger Goodell or from the Steelers organization themselves should the DUI charge on Ward indeed stand.

Goodell can not make rulings on the personal conduct of players during the lockout, but NFL spokesman Brian McCarthy told FOXSports.com back in mid-March that the league plans to enforce its personal conduct policy even during the lockout. “While players won\’t be able to get the benefit of our evaluation and counseling program during the work stoppage, the personal conduct of players and employees is an integrity-of-the-game issue,” McCarthy wrote in an e-mail. “Any misconduct that is detrimental to the integrity of and public confidence in the NFL will certainly be addressed when play resumes.” It is yet to be seen if in fact the new labor agreement will change this, but one could assume that Goodell and the league will be pushing for the ability to enforce its personal conduct policy retroactively.

Should Goodell and the league get their way on this, there is a long laundry list of players that Goodell will need to address once the lockout is over and early Saturday morning, Ward became one of them. Looking over some recent DUI\’s of receivers, Goodell has suspended one and let another off with no suspension. Browns wide receiver Donte\’ Stallworth was suspended without pay for 2010 season after pleading guilty to killing a pedestrian while driving drunk. Jets wide receiver Braylon Edwards on the other hand was not suspended at all following his DUI arrest last September, but the Jets did hold him out of the first quarter of the team’s game against the Dolphins that following Sunday night. Of course I am sure the death involved in the Stallworth incident made that offense much worse in the eyes of Goodell, as it certainly was, but driving drunk is still driving drunk.

If Goodell does not discipline Ward, the Steelers still might in a much lower capacity. Former Steelers wide receiver Santonio Holmes was made inactive for a 2008 game against the Giants after police charged him with a misdemeanor count of having a small amount of marijuana in his possession. Holmes did not seem impaired, so officers let him go and charged him through the mail by summons. That however was not the first run-in with the law for Holmes while he was in Pittsburgh and I do not believe Holmes was docked a paycheck for the game or the NFLPA certainly would have filed a grievance. This was explained as a coach\’s decision to make Holmes inactive, because of the distraction it caused. He was not suspended however for that incident alone.

What most likely will happen with Ward, is what happened with Edwards last season. Ward likely will only get a tongue lashing from the Goodell and the Steelers might choose to not let him start week one against the Ravens. They might hold even hold him out the entire first series, but I doubt they bench him and make him inactive like they did with Holmes.