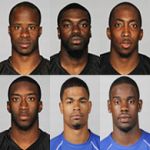 The Steelers settled quite a few nerves across Steeler Nation last night when it was announced that veteran cornerback Ike Taylor has agreed in principle to a new 4-year contract that will likely allow him to finish his career in Pittsburgh. The contract of course cannot officially be signed until 6 p.m. Friday, but it seems to be a done deal right now by most accounts. The re-upping of Taylor means that there will be no concerns of who will start out the right cornerback spot and now buys the Steelers some time to transition towards a youth movement in their secondary.

Taylor is by no means a spring chicken, but he is an offseason training warrior as evidenced by his many offseasons of training with the renowned Tom Shaw down in Florida. If anyone can ward off Father Time longer than most, it is Taylor and while he might not get the accolades of being a shut-down type corner, he fits the Dick LeBeau system perfectly. He is a great tackler and knows his role on the team. In the past he has helped out plenty on special teams, but I expect that will not be asked of him going forward in attempt to save the wear and tear on him.

While the new deal reportedly is for four years, it will likely be structured in a way that gives the Steelers an easy out after 3 years, if indeed he shows signs of slowing by then. Knowing the way Taylor trains though, he very well could end up playing out the contract, but that is not that important though at this time. After 2011 or 2012, he could very well shift inside to a nickel role if either of the young corners progress fast enough, but there is no rush in doing that. He is one of the best in the league at bump and run type coverage and despite his lack of hands, he simply plays above the line and currently is the best proven corner the Steelers have on the roster.

The Steelers headed into the offseason with a huge question mark at the cornerback position as nickel cornerback William Gay was expected to be an unrestricted free agent like Taylor. The Steelers did draft Curtis Brown and Cortez Allen back in April, but the loss of mini-camps and OTA sessions due to the lockout means that they in no way could they have been expected to contribute much in the early part of 2011. The re-signing of Taylor now means both can be eased along and make their contributions initially on special teams with a look towards a bigger role down the road.

The Steelers also still have 2010 draft pick Crezdon Butler and 2009 draft pick Keenan Lewis on the roster and one of those two could be asked to step into the nickel role this year should Gay not return. If Gay does return, Lewis or Butler might be in a fight for a roster spot. There is also speculation that either Butler or Lewis could be moved to free safety as well. Lewis has been a huge disappointment thus far and Butler has yet to see the field except for special teams work. Butler did however work some at the free safety spot last year at training camp and it is hard to believe the Steelers would give up on him so quick. Lewis is in the final year of his rookie contract and could be a final roster cut if no improvement is made at Latrobe. If he does indeed not make the roster, it would mean the Steelers struck out with both cornerbacks they drafted in 2009 as Joe Burnett was sent packing last year in the final cut-downs.

If Gay indeed does return, and that is a big if right now, the Steelers would head to camp with 7 roster ready cornerbacks and a few more camp body corners in Niles Brinkley and Donovan Warren. Last season they chose to carry 6 on the 53 man roster and one would think that would be the number this year as well. Your fears should now subside as there is now cornerbacks a plenty in Pittsburgh. Crisis averted.