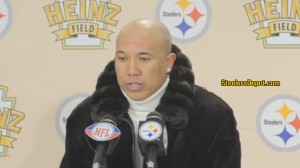 Steelers wide receiver Hines Ward was a guest analyst this evening on NFL Total Access and was asked by host Rich Eisen how much longer he would like to play. Ward joked initially that he would like to play one year longer than Ravens linebacker Ray Lewis plays, so he can experience what it is like to play the Ravens without #52 on the field. Eisen pressed Ward further for a time frame and Ward said he would do what Deion Sanders suggested he do, and that is to play until the wheels fall off, because once its gone, its gone.

Ward says he does not want to leave the game too early and still wonder if he can still play. He also noted he did not want to be like Brett Favre and keep flip-flopping with his decision. There will be no “Ward Watch”, he joked. Ward continued on by saying he wants to play as long as the Steelers want him to play and he does not want to play for any other team but the Steelers. He said God willing that if he stays healthy and in shape he can play a couple of more years.

Ward is currently signed through the 2013 season and playing two more years would sound about right for him. He just underwent surgery on his left thumb to repair ligament damage and looks to have shed his cast on that hand.