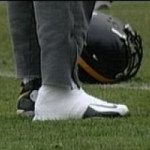 The news last week that Steelers quarterback Ben Roethlisberger might require surgery on the foot he injured last year, has received quite a bit of attention in the media over the last few days as several interpreted the story as some sort of breaking news. The news however is to no concern to Roethlisberger\’s agent or wide receiver Hines Ward.

Ryan Tollner, Ben\’s agent, told the Pittsburgh Post Gazette today that there is nothing new to report. “There\’s nothing new there,” Tollner said. “The doctors elected not to do surgery and to let it heal. If it ever got worse, they might have to do something. Ben is kind of surprised that it\’s getting the attention. He hopes and expects never to have surgery on it. The foot was feeling better after the season, with the extra time this offseason, it\’s feeling great.”

In addition to Tollner, Ward does not seem too concerned either. Ward joined The Herd with Colin Cowherd this morning on ESPN Radio and was asked by Cowherd about the foot of Roethlisberger. Ward replied, “You know what, I know he had a foot problem for a while now. You know, I just think is it beneficial for him to go in and get the surgery or just go ahead and fight through it? He has been playing with it for a while. Me knowing Ben, he is going to fight through it like he always has and he will find a way. I know he has a big wedding coming up at the end of the month in July and I know he is eager and excited for that. I expect Ben to be full go when the season starts so I am not worried about him. I know last year missing the first four games last year, I don’t foresee Ben missing any more games. I know he does not want to miss any and wants to be out there competing with us.”

In the end this seems to be a whole lot to do about nothing and if the doctors really thought Ben needed surgery, they would have already gotten it done and out of the way. Roethlisberger could always aggravate it, but like he said, he will have to play it by ear. He also noted in the interview with Scott Brown that the foot has really come a long way and that he hasn\’t had too many problems with it recently. Roethlisberger gets the tag quite a bit as a drama queen, but I do not really see that here, he was asked about the foot and gave an answer. Sure he might be playing it up a bit, but if that is his worst fault right now, I am totally fine with it.