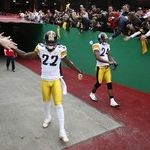 The latest trade rumors on Friday came from ESPN reporter Sal Paolantonio who stated today on Sirius NFL Radio that the Philadelphia Eagles are no longer interested trading quarterback Kevin Kolb for 2012 draft picks, but instead now want a player who can help them win games now. The Eagles are needing a cornerback, but may not be willing to get involved in the feeding frenzy for Oakland Raiders free agent cornerback Nnamdi Asomugha. There is speculation for the last few days that the Eagles might covet Arizona Cardinals cornerback Dominque Rodgers-Cromartie to play opposite Asante Samuel and that a Kolb for DRC trade would be the only way the Cardinals could land Kolb, whom they covet.

Darren Urban wrote on the official Cardinals website that he does not think it will happen for several reasons, but does say that the playing style of Rodgers-Cromartie doesn’t exactly fit the mentality of new defensive coordinator Ray Horton. Horton of course is the Steelers former defensive backs coach who took the job with the Cardinals immediately following the 2010 season. The Cardinals also drafted LSU cornerback Patrick Peterson in the first round of the draft in April, but he might not be ready to jump right in as a starter due to the time missed during the lockout. The Cardinals also have cornerbacks Greg Toler and A.J. Jefferson under contract, while Michael Adams and Trumaine McBride are in limbo as free agents.

Should the Cardinals indeed do the Kolb for DRC deal, they very well could turn around and pursue either Ike Taylor or William Gay or even both to fill the hole left by DRC. Gay was tendered by the Steelers just in case the 2010 free agency rules would be used once again, but it looks almost certain now that Gay will be an unrestricted free agent like Taylor is. Both know the system that Horton will be putting in and both also know former Steelers cornerback Deshea Townsend, who is the new secondary coach for the Cardinals.

According to John Clayton, the Cardinals look to be players in free agency and the trade market as they have $37.38 million of cap room along with a current payroll of $85.76 million. Clayton claims they have the fourth most cap room of any team in the league right now. They could give Kolb a big long-term contract with plenty of room to even over pay Taylor to get him out of Pittsburgh. Gay doesn\’t look to have many teams ringing his phone for his services in free agency and a two year, 3 million offer might be enough to land him as well.

Taylor and Gay would add a veteran presence to the Cardinals secondary and help the Cardinals not have to worry about rushing the rookie Peterson along. Even though Arizona Republic beat writer Kent Somers doubts DRC is on the trading block, he does not rule it out a trade happening. If it does, I would not be surprised to see Taylor or Gay end up in Pittsburgh West of course the Cardinals might still have a bad taste in their mouth from over paying Steelers cornerback Bryant McFadden a few years back. He did not fit their man coverage type defense in place then and was traded back to Pittsburgh during the 2010 draft.

Personally I hope this does not happen as I hope both Taylor and Gay return in 2011 as I think the Steelers can still win with them as they make the move to the the youth on the roster.