You can tell it is the lull before training camp as bloggers, news outlets and online sports media persona\’s scrape for any topical subject to write or speculate about in order to bring visitors to their sites. I guess you can add this very post on to the heap, but only in hopes of squashing all of this stupid speculation of Terrell Owens landing with the Steelers. The notion was put into motion in a Sporting News article by the rumor flogging writer Mike Florio, who runs Pro Football Talk. In Florio\’s defense he does break a ton of news, but he is better known for sensationalizing topics and speculating beyond reasonable realms at times. Be that as it may, I have seen this being posted as if it was fact on Steeler blogs and forums across the internet. Let me save everyone some time. It ain\’t going to happen. 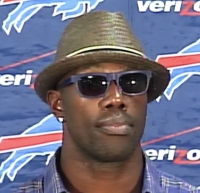 I have seen one blogger go as far to say that the Steelers have some issues at the wide receiver spot. Really? Issues? Hines Ward is coming off of one of his best statistical seasons, Mike Wallace grew into an NFL receiver right before our very eyes last year in his rookie season. Two veterans were signed via free agency, one of whom already knows the system and won a Super Bowl, in the likes of Antwaan Randle El. Throw on top of this the drafting of two exciting rookie wide receivers via the draft and it helps ease the offseason loss of Santonio Holmes. Speaking of Holmes, his trade to the Jets was two fold. One, he was going into the final year of the contract he signed in 2006 and it was going to cost a mint to keep him. Two, he was becoming a reoccurring problem and yet another distraction on a team that tries to keep it\’s distractions at a minimum. Sure the Steelers have failed at it recently prior to him being traded and his unexpected exit can clearly be interrupted as a message to the rest of the roster.

Now back to the TO Show. I use that term, as it is not only the name of his VH1 reality show, it is his real life as well. NFL fans and owners everywhere know exactly what you get with Owens. Distractions, lots of distractions and divided locker rooms on top of it. In addition, Owens wants starter type money and wants to start. Both those things are not going to happen right now in Pittsburgh. The money spent on El was not doled out so he can play the 4th receiver spot either. Lets assume an injury to Ward or Wallace happens, God forbid. Owens still would not be an option in my opinion. He is not worth the trouble and does not fit what the black and gold do.

In closing, I will say yes, the Steelers do have issues, but to say it is at the wide receiver position is stupid. Stupid like suggesting the Steelers as a landing spot for Owens. Stupid just like the TO Show!