Tiger Woods owes Big Ben a great big thank you as Ben is knocking Tiger off of the front pages of TMZ and such. The latest hot story for some reason is Ben having his picture taken with some Milledgeville Police Officers prior to the report of the incident. What this has to do with anything, I have no idea.

It has been a while since we have heard from Observer Reporter writer Dale Lolley. Lolley has finally penned his thoughts on the whole Ben Roethlisberger saga and done so quite eloquently if I might say.

Oh yes, this is just great as well. Who really gives a shit what Michael Irvin thinks Ben did right or wrong. CBS news, that\’s who. Hey Michael, go do a few lines of blow and then go fornicate yourself.

ESPN AFC North Blogger, James Walker, certainly knows how to stir up Steeler Nation. Yesterday he posted the photo below and wanted people to respond in In five words or less and provide thoughts on the photo. That picture sent chills up my spine and you can read his favorite replies here. 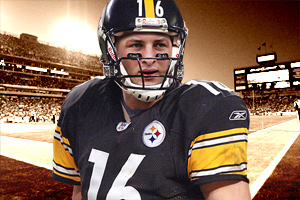 Pittsburgh\’s best country radio station, Y108 had backup nose tackle Chris Hoke on for an interview yesterday to discuss the Roethlisberger allegations and the Steelers activity in free agency among other things. You can listed to the interview below.
[audio:http://67.72.16.166/wdsy2/2264245.mp3]

Bill Woodside of Mt. Holly Springs, Pa has quite a collection of memorabilia from Anheuser-Busch as well as a garage full of Budweiser\’s tribute to his beloved Pittsburgh Steelers. This Bud is for you, Bill.
[flv:http://whtm.acc-tv.com/sites/whtm/news/stories/0310/video/031110budman.flv 480 368]