Steelers assistant head coach and defensive line coach, John Mitchell will be one of eight inductees going into the Alabama Sports Hall of Fame on Saturday. Mitchell was the first African-American to play football for the University of Alabama.

Dale Lolley has a great Q&A with second year quarterback, Dennis Dixon. Dixon talks about the wildcat formation and backup quarterback job amoung other things.

Quarterback Ben Roethlisberger was court side for the Orlando Magic, Cleveland Cavaliers game on Thursday night. Roethlisberger was booed every time he was shown on the jumbo tron. At one point he held up two fingers for the camera, an obvious reference to the two Super Bowl titles he has.

Also during last night\’s Cavaliers Magic game, TNT showed Browns quarterback Brady Quinn with Ben Roethlisberger\’s name on it. I am pretty sure this is one deadly sin. Brady only wishes he was Big Ben. 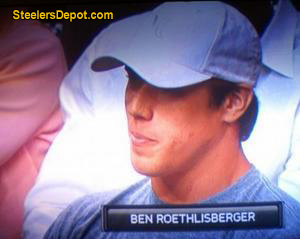 Speaking of the Brady girls, Pats quarterback Tom Brady is looking more intimidating every day. Puppy in the front, baby in the back.

Some images will just burn holes in your eyes. Look at the still photo below of Bill Cowher sounding that stupid siren before the Pens, Hurricanes game Tuesday night.