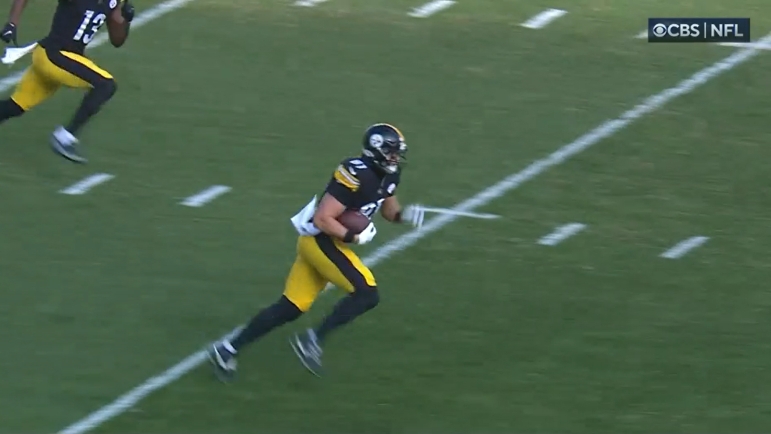 The season has just ended, so we’ve only just begun to scratch the surface when it comes to digging into the Pittsburgh Steelers’ free agency projects this year. They have some significant names due to hit the open market, like Cameron Sutton, Terrell Edmunds, Larry Ogunjobi, and perhaps one of the more interesting names, four-year veteran tight end Zach Gentry.

A fifth-round draft pick out of Michigan, Gentry played very sparingly in his first two seasons as he continued to develop, but he emerged as the Steelers’ primary blocking tight end over the past two years and has also been able to make some contributions in the passing game. Now he’s off to a new frontier: the open market.

“I have so much love for this organization and the people who are here, so it’s going to be quite the process, quite the journey”, he said of free agency, via Teresa Varley for the team’s website. “I’m just intrigued to see how it goes, what happens”.

Gentry has played over 1,000 offensive snaps over the past two seasons and has become a valuable run-blocker, integral to what success they do have in that area. He’s also caught 38 passes in that span for 299 yards, though he’s still looking for his first touchdown. He caught a 23-yard pass in the finale, and a 32-yarder back in Week 1.

He has really grown within the Steelers organization, something he acknowledged in speaking on the subject. “Definitely, as a player, as a person, as a professional”, he said. “I came in here as a much scrawnier version of myself. A lot more underdeveloped as a player, so I’ve just done a lot of growing here. I learned a lot from a lot of the other guys in this locker room”.

He has formed a great combination with fellow tight end Pat Freiermuth, with the latter emerging as the receiving threat and frankly saving him from having to perform many of the tasks—namely in-line blocking—that don’t play to his strengths.

In fact, when you come down to it, the Steelers don’t really have anybody else on the roster who can do what Gentry does. Freiermuth through two seasons hasn’t shown to have the strength or form to be a complete blocking tight end, though he can get out in space, and Connor Heyward lacks the size for some of what he would be asked to do in Gentry’s role.

The tight end market can vary depending upon what is available, and this could be a pretty dry market this offseason. We’ve seen what a healthy tight end market can look like back in 2019 when guys like Gentry were getting $6 million APY deals. What will it cost to keep Gentry, ideally before he even hits the open market?