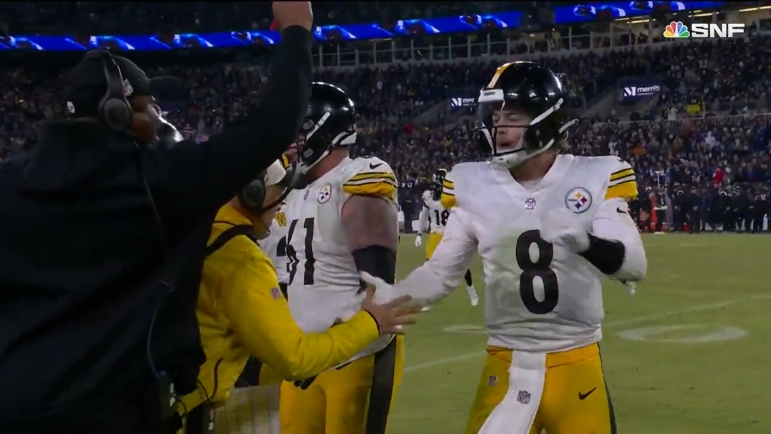 Kenny Pickett didn’t just make some Steelers/Ravens history Sunday night, a new chapter to be written in that intense rivalry. He also made some NFL history.

According to OptaStats, Pickett is the first rookie in NFL history to lead game-winning drives in two consecutive weeks.

Kenny Pickett of the @steelers is the first rookie in NFL history to have a game-winning TD pass in the final minute of the 4th quarter in back-to-back games.

Pickett’s now willed the Steelers to victory against the Las Vegas Raiders on Christmas Eve and against the Baltimore Ravens on New Year’s Day. These wins have made holidays extra special with Pickett playing the best ball of his young career since that fourth-quarter comeback.

Against the Raiders, Pickett and the Steelers went on a ten-play, 76 yard drive led by Pickett’s arm. He smartly hit checkdowns to RB Najee Harris, showed chemistry with TE Pat Freiermuth, and finished things off with a dart over the middle to WR George Pickens.

Sunday night was a similar story. Trailing 13-9 with just more than four minutes to go, Pickett took the Steelers on an 11-play, 80 yard drive. He made several high-level throws and capped things off with this scramble drill touchdown to Najee Harris along the left sideline.

Over those two game-winning drives, Pickett went a combined 12/15 for 139 yards 2 TDs and zero interceptions. For those scoring at home, that’s a 144.9 QB rating. And more importantly, a pair of wins for the Steelers who had no margin for error.

Evidently, the back-to-back winning drives is a NFL first. In a league that’s been playing since 1920, there aren’t a lot of rookie “firsts” anymore. But Pickett checked a box tonight. He checked a lot of boxes tonight and showed why the Steelers made him the first QB off the board, the only one in the entire first round, and deemed him their franchise guy.

While Pickett’s had predictable rookie struggles, he’s ending the season on the highest of notes. And if he can put this team in the playoffs, it’ll make for an incredible December/January run. Which will be nearly another record. If Pittsburgh makes the playoffs, they’ll be just the third team in NFL history, and second since the 16-game season was created in 1978, to make the playoffs after starting a season 2-6. They’ll be the first to do it and through a Wild Card berth, not winning their division.