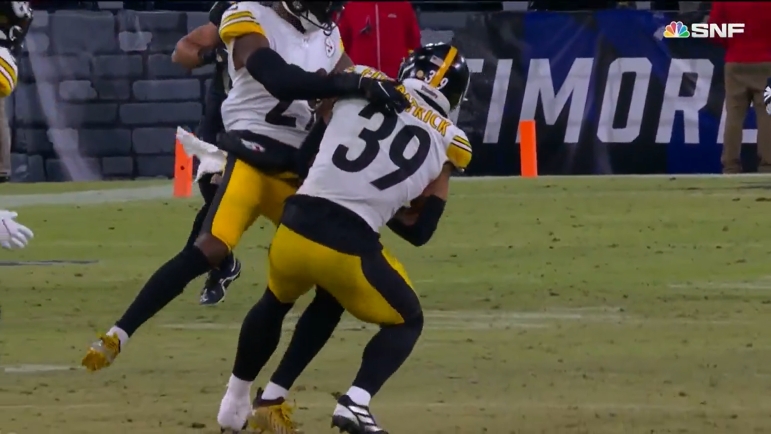 For the past two weeks, the Pittsburgh Steelers have watched their young offensive players step up and deliver in the clutch. Rookie quarterback Kenny Pickett has thrown game-winning touchdowns in the past two games in the final minute to rookie wide receiver George Pickens and second-year running back Najee Harris.

Yet it was the defense in both occasions who not only kept the game close enough for the offense to catch up (allowing a total of three second-half points over the combined 60 minutes of play) but also slamming the door with game-sealing interceptions.

The week before it was Cameron Sutton, a sixth-year veteran cornerback, making the grab. This Sunday against the Baltimore Ravens, it was All-Pro safety Minkah Fitzpatrick, who snared his sixth of the year, a new career high and tying him for the league lead this season. It’s becoming the expected practice in the locker room, but it was never a surprise, even if it fuels confidence.

“It does, but I feel like we’re prepared for it”, outside linebacker Alex Highsmith said about the defense’s recent closeout performances via the team’s website. “Coach [Mike] Tomlin does such a great job of preparing us for those moments. We do so many two-minute drives in camp, in practice throughout the year, so those moments I feel like we’re prepared for. The guys on the back end do a great job of locking it down, Minkah always coming up with the clutch interception, so that’s awesome”.

The Steelers’ defense leads the NFL in interceptions this season now with 18, grabbing four over the course of the past two games after drawing a blank for two games in a row. In addition to Fitzpatrick’s six, Sutton and Levi Wallace both have three on the year, while T.J. Watt has two, and Ahkello Witherspoon, Arthur Maulet, Damontae Kazee, and James Pierre all have one.

Though they rank first in interceptions, they are at or near the bottom in fumble recoveries, which puts them in the middle in terms of total takeaways. But they have a plus-three turnover differential on the season thanks to the past couple of games, even if they have allowed 52 more points than they’ve scored.

Of course, they’re only 8-8 on the year, so it’s not exactly surprising that they might have mediocre numbers. But they have 11 takeaways in the past eight games while only allowing under 17 points per game, which would rank second in the NFL right now over the full season.

One of the biggest reasons their numbers have improved so much is because of the work they’ve done to finish games that they were failing to close earlier in the year. They’re only allowing a little more than a touchdown per game in the second half since the bye week and that has only gotten better over time.