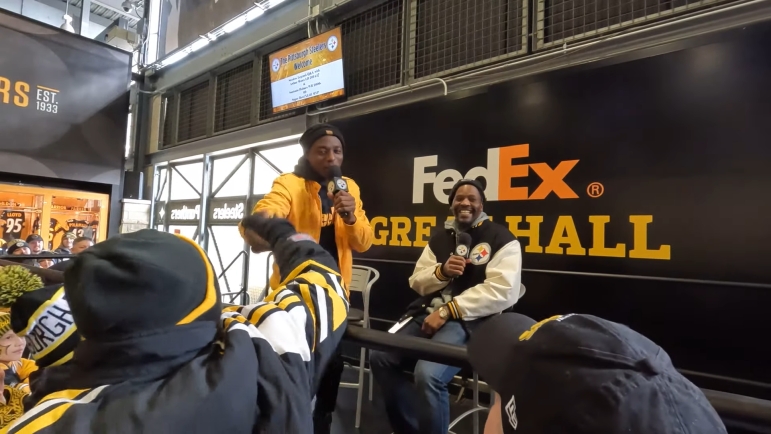 Former wide receiver Santonio Holmes’ tenure with the Pittsburgh Steelers could have ended more smoothly, which is a shame, because I believe he was one of the most underrated receivers in team history. He and the organization have long since gotten to a good place, however, and he has become one of their shining alumni, even participating in a number of team events and adjacent activities.

Holmes recently hooked up with former Steeler Arthur Moats, the two hopping into the FedEx Great Hall at Acrisure Stadium, where the former Super Bowl MVP was asked about which team he enjoyed beating the most, and his favorite moment. His answer was unequivocal.

“Without a doubt, it was going through that threepeat in that 2008 season where we kicked the Ravens’ ass three times”, he said. “Without a doubt, that was probably my best moment of being a Steeler was getting a chance to score touchdowns against the Baltimore Ravens, and to know that those games were always hard-fought”.

The 2008 season was a good year for Pittsburgh, obviously. It marks the last time that the Steelers won the Super Bowl, and beating the Ravens along the way certainly didn’t help. Head coach Mike Tomlin was in his second season, with John Harbaugh in his first in Baltimore with rookie first-round quarterback Joe Flacco under center.

Those were some exciting games. The first matchup featured a 38-yard touchdown from Holmes went into overtime after the Ravens scored the game-tying touchdown in the fourth quarter, with a Jeff Reed field goal sealing the deal in week five. Toward the end of the season, it was that man, Santonio Holmes, who scored the game-winning touchdown on a four-yard pass from Ben Roethlisberger with 43 seconds remaining, coming on 3rd and goal from the four.

You might well remember this play. He was originally ruled down short of the goal line, but the automatic replay overturned the call on the field and argued that Holmes had possession of the ball while it was still breaking the plane. Had that not been overturned, the Steelers may have kicked a field goal to tie and send it into overtime.

That touchdown kept the Ravens from winning the AFC North, forcing the Ravens to travel on the road in the postseason as a wildcard, which led to one of the most iconic postseason games in Steelers history, beating Baltimore in the AFC Championship game.

That game featured a 65-yard touchdown catch from Holmes, which gave Pittsburgh a 13-0 lead at the time. The Ravens eventually made it interesting, cutting it to 16-14, but a Troy Polamalu pick six with under five minutes to play shut the door and led to perhaps the loudest moment in Heinz Field history.

“It was really about ‘F Purple’ when it came down to playing the Baltimore Ravens”, Holmes said, and he lived by it that year. He scored a touchdown in every one of those games. And he’d go on to have a pretty good Super Bowl game two weeks later, as I recall, following that conference final. But he’d sadly only have one more year in Pittsburgh after that.