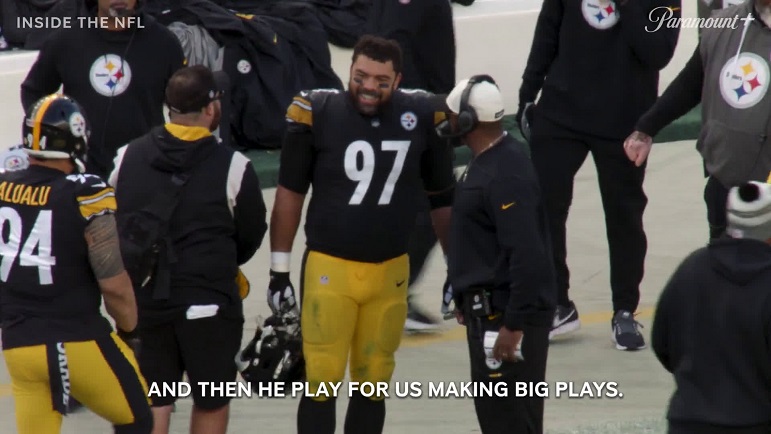 When the Pittsburgh Steelers made H-back Connor Heyward their sixth-round pick at 208th overall in the 2022 NFL Draft, head coach Mike Tomlin said it had nothing to do with him being the younger brother of All-Pro defensive lineman and team captain Cameron Heyward.

Tomlin focused on Heyward’s abilities, always throwing his support behind the football player that Connor Heyward was, believing he’d be a good one for the Steelers.

That belief paid off Sunday in Week 18 against the Cleveland Browns and had Tomlin and Cameron Heyward sharing a special moment on the field following Heyward’s 27-yard leaping, twisting catch down the middle of the field, helping set up Derek Watt’s 1-yard touchdown run to cap off the win.

"He plays for us making big plays. Ain't it cool?" (via @NFLFilms) pic.twitter.com/NpZdM5L0nY

“I told you — that boy’s a player!” Tomlin was captured by Paramount +’s Inside The NFL, shouting to Cameron Heyward on the sideline, according to a video via the NFL’s official Twitter page. “This week I told you he’s a player.”

Connor Heyward came on in relief of the injured Pat Freiermuth in the Week 18 28-14 win over the Browns and delivered down the stretch, finishing with three catches on four targets for 45 yards. Two of his catches went for first downs in the win, including the highlight-reel worthy 27-yarder down the middle that was reminiscent of the catch he made as a member of the Michigan State Spartans against the Pittsburgh Panthers in the Peach Bowl last season.

Reflecting on his 12th season overall — and first with his brother as a teammate — Cameron Heyward said how proud he was of his little brother, Connor, on the latest episode of his podcast “Not Just Football w/ Cam Heyward.” Getting a chance to share a special moment with Tomlin on the sideline while watching Connor make plays was the cherry on top.

“How cool is that, man?” Tomlin said to Cameron Heyward after Connor’s big play. “We sitting around talking about, man, your brother’s a fullback, man. Let me get him to the Senior Bowl. And then he plays for us making big plays. Ain’t it cool?”

Football truly is a family game, and seeing the family bond that exists in Pittsburgh now, not only with the Heywards, but the Watts on the gridiron is truly special to see.

T.J. and Derek Watt shared a special hug after Derek’s 1-yard touchdown on Sunday in what was likely his final game as a Steeler, while Cameron Heyward was able to beam with pride watching Connor seize upon his opportunity offensively and make big plays in a much-needed win.