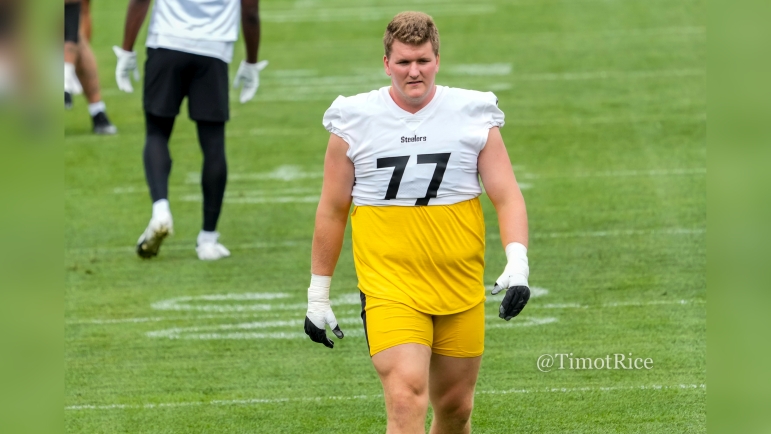 Former Pittsburgh Steelers’ offensive lineman John Leglue is headed to Tennessee. The Titans signed him to a Reserve/Futures contract, the team announced moments ago.

The #Titans have signed offensive lineman @theJohnLeglue to a Reserve/Futures contract.

Leglue finished the 2022 season on the Steelers’ practice squad. It’s not known if Pittsburgh offered him a Futures deal or not.

Leglue signed with the Steelers late in the 2020 season, landing on the team’s practice squad and being carried throughout the offseason. He began the 2021 year on the practice squad but was elevated when injuries struck and wound up starting five games at guard, logging over 400 snaps.

Known for his versatility, Leglue played up and down the line while with the Steelers and even dabbled in being the team’s backup/emergency long snapper. He was also a high-motor player and the first to help a teammate up downfield.

Thought John Leglue played his best game of the season Monday against the Browns. One theme that's been constant all year though has been his effort. Runs downfield every play.

Guy has a nose for the football, ha. #Steelers pic.twitter.com/ykhF6SfKGt

Here’s how we evaluated Leglue’s play this summer.

“His actual camp seemed a bit disappointing, he had some ugly losses in 1v1s and DeMarvin Leal’s quickness and active hands gave him fits. Leglue looked better in the preseason opener and had arguably the best performance of any Steelers’ lineman. He followed Meyer’s rules well and worked independent hands and flashing a “dead/bait” hand to get the defensive lineman to shoot theirs.

Leglue also works hard to recover when beat and he’s a high-effort player in general, that much was evident last year. He’s still battling for a roster spot and it wouldn’t be completely undeserved but for a team rightly dissatisfied with its offensive line and likely to add help, Leglue could get squeezed out and fall back on the practice squad.”

Beat out by Kendrick Green, J.C. Hassneuaer, and the acquired Jesse Davis, Leglue was waived at final cutdowns. He did not appear in a game for Pittsburgh in 2022, their offensive line staying more intact than any other in football. All five starters played in all 17 games for the Steelers this season.

Now, Leglue will look to continue his NFL career with Mike Vrabel in Tennessee. Leglue began his NFL career as an undrafted free agent out of Tulane in 2019, signing with the Denver Broncos and learning under Mike Munchak. He spent time in New Orleans and Green Bay before coming to Pittsburgh and now going to Tennessee.