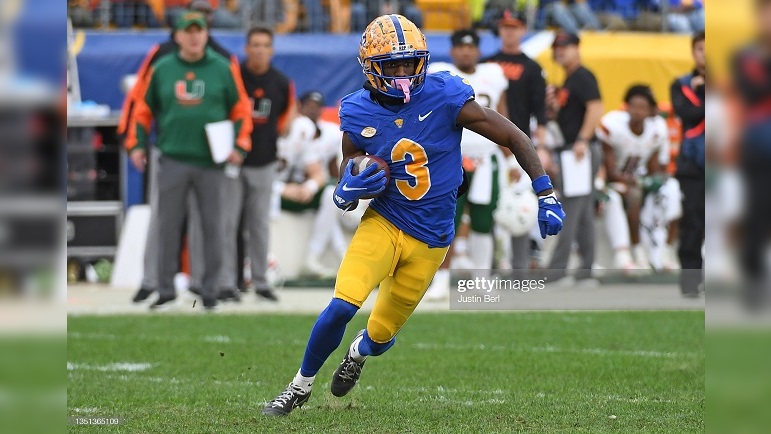 The Pittsburgh Steelers have a lot of holes to fill this offseason if they want to get back to challenging for Super Bowls. One position that has been receiving a lot of press lately for the Steelers to use an early draft pick on is wide receiver, and with quarterback Kenny Pickett’s former Pitt teammate Jordan Addison declaring for the NFL Draft that talk of the Steelers using one of their first three draft picks on the receiver has never been hotter.

Despite all this talk, I think it would be a mistake to use one of those first three draft picks (17, 32, 49) on a wide receiver given the other needs of the current roster. Now to preface, obviously after free agency, the Steelers could look different and a wide receiver with one of the picks may make sense, but as of right now, it does not.

First off, while a wide receiver will need to be drafted this year, next season’s top three wide receivers will be Diontae Johnson, George Pickens, and Calvin Austin III. While Austin III did not play this year due to injury, he was raved upon during training camp. Given this, there isn’t an urgent need if all three are healthy.

A couple of positions that stand out as obvious needs are offensive line and cornerback. These are probably where the first two picks should be used with whichever position head coach Mike Tomlin and general manager Omar Khan view more urgent.

Starting with the offensive line, despite the big improvement this season from the past few, the left side is still shaky. While I am personally a fan of left tackle Dan Moore Jr., he can be improved on and so can left guard Kevin Dotson. However, even bigger than improving on the two, the depth behind the starting five of the Steelers’ offensive line is bad. The team got lucky none of their five missed a game this season. While I don’t think you should draft for depth round one, a first-round offensive line prospect should have a higher ceiling than Dotson or Moore Jr., so while it may not be an upgrade in Year One, over the next few it will be, meaning either Moore Jr. or Dotson will be depth who would both be very good backups. With all the talent at the skill positions, a great offensive line can make a good offensive unit a great one. Invest upfront and reap the rewards.

The second biggest need for the Steelers is cornerback. While I just wrote about it needing to be a priority to re-sign Cameron Sutton, the position still needs to be addressed early. Ahkello Witherspoon is a question mark and Levi Wallace is a CB2 at best. Right now the Steelers need an elite CB1. While I love Sutton, he isn’t that; he just isn’t athletic enough to keep up with receivers like Ja’Marr Chase. The Steelers need an athletic, quick, twitchy cornerback who can lock down opposing quarterbacks’ number one target. With quarterbacks like Joe Burrow, Deshaun Watson, and Lamar Jackson in the division it is necessary to have a lockdown defensive backfield.

Ok, so now the third pick rolls around, and it is a second-round draft pick (remember the Steelers have two second-round picks thanks to the Chase Claypool trade). While the Steelers could get a pretty good receiver at 49, I think they should look toward the defensive line. While it was a good unit last season, it isn’t getting younger. Tyson Alualu probably won’t be back, Cameron Heyward, while playing at a high level, is getting older, and both Larry Ogunjobi and Chris Wormley are free agents. We all saw how bad it can get for Pittsburgh if the defensive line isn’t really good (see 2021) so it would be smart to invest now for when players move on.

While the worst of it is likely over, we saw what it looks like when an elite line unit starts getting older and retiring without high draft pick investments behind them (see Steelers offensive line 2019-2021). Pittsburgh needs to not let that repeat on the defensive side. Our own Alex Kozora wrote last week how it is unlikely DeMarvin Leal turns into a Heyward or Ogunjobi, so Tomlin and Khan should try and get another high-level defensive lineman like Heyward who can learn from Heyward and the other defensive lineman veterans on the team until he is ready to step in and play high snap counts at a high level.

I think the Steelers should attack the draft making sure they get a stud offensive lineman, a lockdown corner, and a potentially elite defensive lineman for the future. After the first three selections, anything should be on the table. A wide receiver in rounds three or four I would not complain about at all, especially given how good the Steelers are at finding late-round wide receiver gems. Yes, reuniting Pickett and Addison would be cool, but I don’t think it is in the Steelers’ current or future best interests. But, if the Steelers want to keep their Super Bowl window under Pickett as long as possible they should make sure their offensive line is elite and make sure their expensive defense doesn’t crumble from lack of reinforcements as the unit ages.