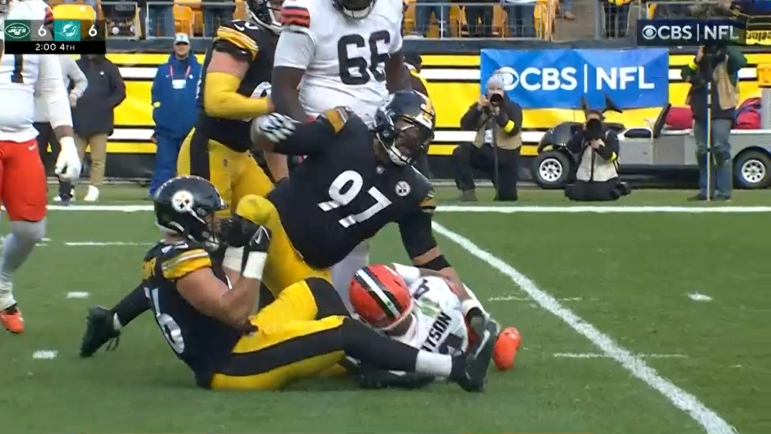 One day after star defensive lineman and team captain Cameron Heyward raised some eyebrows about his future in the Steel City, deferring to management regarding the decision making on if he’ll be a Steeler still in 2023, Pittsburgh Steelers head coach Mike Tomlin downplayed Heyward’s comments Monday during his season-ending press conference with the media.

Heyward has made comments like that in the past few seasons, so while they are surprising to hear initially, it’s nothing new for Tomlin and the Steelers, who have certainly grown accustomed to how Heyward carries himself.

For Tomlin, those comments from Heyward after the loss Sunday showed exactly the type of guy he is when it comes to football.

“Cam is the same type of guy who’ll put a tape job of his last name on his helmet in training camp,” Tomlin stated to reporters Monday, according to video via the Steelers official YouTube page. “That’s just who he is, he takes none of this for granted. He is special because he has a special approach, because he is legitimately humble and hardworking and he takes none of this for granted. And so that’s probably what that was.”

Heyward certainly has a special approach this late in his career. Taking nothing for granted, playing with a chip on his shoulder consistently and fighting for everything that comes his way on every rep in the offseason, training camp, preseason and in meaningful games has allowed him to carve out a terrific career to this point, one that has him pushing towards a potential Hall of Fame enshrinement when it’s all said and done.

‘I’d Love To Be Here’: Cameron Heyward Defers To Management On His Future

Following the win over the Browns that saw the Steelers finish 9-8 but miss the playoffs due to the Miami Dolphins defeating the New York Jets, Heyward was honest about is future overall.

Heyward finished the 2022 season with 10.5 sacks, giving him two straight seasons of 10+ sacks. The 10.5 sacks are also the second-highest single-season total of his career. At 33 years old, he remains an elite-level defensive lineman and a key piece of the Steelers moving forward.

He’ll have a big cap hit next season at 34 years old, and has two years remaining on a four-year, $78 million extension he signed in 2020. Knowing he’s still under contract, Heyward stated he wasn’t considering retirement, but instead deferred to management after the game regarding his future in Pittsburgh.

“It’s the business side of things,” Heyward added, according to Adamski. “It’s the NFL, (which stands for) ‘Not for long.’ I want to be back. I would like to be a Pittsburgh Steeler still. But you don’t know what’s going on in the future.”

That’s largely who Heyward is, and it wasn’t alarming at all to Tomlin. Heyward isn’t going anywhere any time soon. He remains an elite-level player at this point of his career and is a foundational piece for the Steelers moving forward. Carrying that type of mentality into another season though could be great for not only Heyward, but the rest of the defense around him.