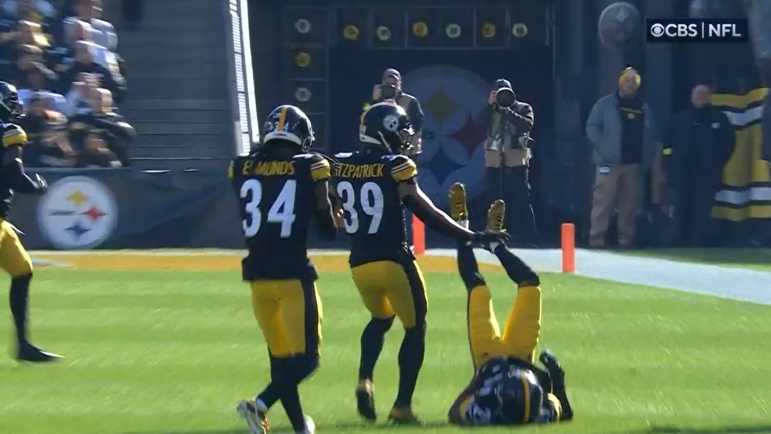 The Pittsburgh Steelers were hoping to have another game to play this weekend. They very nearly did. They won their game, which they needed to do, but only got one of the two results they needed from the rest of the league to advance to the postseason.

And that means they, and we, are immediately turning our attentions to the offseason and everything that means. The first priority on the horizon is expiring contracts, and there are a number of significant ones this year, including Terrell Edmunds, their starting free safety.

A 2018 first-round draft pick, Edmunds did not have his fifth-year option picked up, but he re-signed with the Steelers this year on a one-year prove-it deal. He did prove it, having a strong, consistent season, and one would imagine Pittsburgh will want to bring him back again.

The feeling should be mutual. According to Brooke Pryor of ESPN, he does hope to be back in Pittsburgh in 2023. He also said that he has a better idea of what to expect during the free agency process this time around after experiencing it last year.

SS Terrell Edmunds, who will be a free agent, says he wants to be back in Pittsburgh next year. Says he knows what to expect with the negotiating process this time around.

Edmunds did not re-sign with the Steelers until shortly before the 2022 NFL Draft, about a month and a half out from the start of free agency. He would later say that he did have some multi-year offers on the table, but opted for a one-year contract worth a little over $2.5 million to stay in Pittsburgh and hope to play his way into a better deal.

He finished the season with 70 tackles in 15 games, including three tackles for loss, with two sacks and five passes defensed. While his numbers may not jump out at you as flashy (his stat line from a season ago certainly looks prettier), he certainly put together his most consistent season to date.

If the Steelers do manage to keep Edmunds on a deal both sides are comfortable with, perhaps nobody would be happier than Pro Bowler Minkah Fitzpatrick, who annually has made the pitch to continue to play alongside his draft classmate (albeit originally with Miami) since he’s been here.

Pittsburgh does have another decision to make, however. Another safety they targeted in free agency, Damontae Kazee, played well in the second half of the season for them after coming back from injury during the preseason. He started several games due to injury to others, playing in nine, coming down with a couple of interceptions with 20 tackles, mostly seeing time as a sub-package player. He played under 300 snaps defensively.

The team may well have to choose between one or the other, especially if they’re going to pay up to keep cornerback Cameron Sutton around. But Edmunds has been their starter for the past five seasons and has played his way into a steady presence.