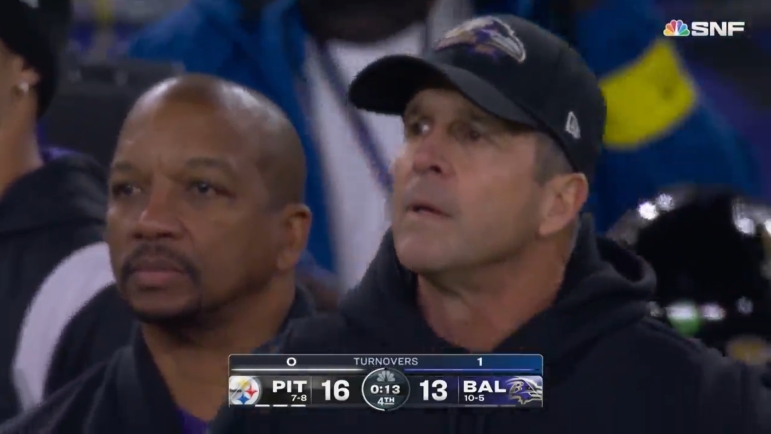 The Pittsburgh Steelers have won three consecutive games in Baltimore against the Ravens after securing their eighth victory of the 2022 season on Sunday. It was just the third away winning streak of three games or more in the entire seasons, two owned by Pittsburgh.

They had to end the longest defensive streak in the NFL since 2005 without allowing a home touchdown in order to do it, as well. The Ravens had not allowed a touchdown in Baltimore in 15 quarters and 14 minutes until rookie quarterback Kenny Pickett found running back Najee Harris for the game-winning touchdown with under a minute to play.

And it brought former Steelers quarterback Ben Roethlisberger much joy. Not just because it kept the team in the playoff race. Not just because it made him feel better about the future of the franchise in Pittsburgh’s hands. But also because it was a win over the Ravens, and over head coach John Harbaugh, against whom he played for 14 years, with many trips into that stadium.

“That place is nuts. It’s so much fun, and so awful all in the same moment to play at that place on primetime”, he said in yesterday’s episode of his Footbahlin podcast about playing in Baltimore. “But so many amazing things happened”.

“To see Coach Harbaugh, who Ihave a lot of respect for, Miami [of Ohio] guy, to see his face at the end of that game, just the devastating [look], was just like, ‘Oh man’”, he continued. “That’s such a great feeling as a Steelers fan and ex-player”.

I can confirm, because the day after the game I had somebody request a screenshot of Harbaugh’s look of devastation at the end of the game. The loss was their third in the past six games. While they had already secured a playoff spot and are still 10-5 on the season, they don’t have much chance of winning the division now.

More on that last point, which I’ll talk about later in another article specifically on that subject, if the NFL makes the decision not to replay the week 17 game between the Cincinnati Bengals and the Buffalo Bills, then it would give the AFC North to the Bengals, because it would guarantee that they would finish the year with a better winning percentage than the Ravens, even if Baltimore beats Cincinnati in week 18.

The Ravens just barely managed to beat the Steelers earlier this season, only one of two losses for Pittsburgh since the bye week, now 6-2 in that run. They missed two field goals, one of which was blocked, and threw three very avoidable interceptions with their backup quarterback.

Granted, they barely beat the Ravens on Sunday, needing a game-winning touchdown drive after having only scored nine points in the first 59 minutes. But they still won, and Harbaugh was still upset, and that’s all that matters. One for the win column, another for the sad Harbaugh column. It was a good night all around.