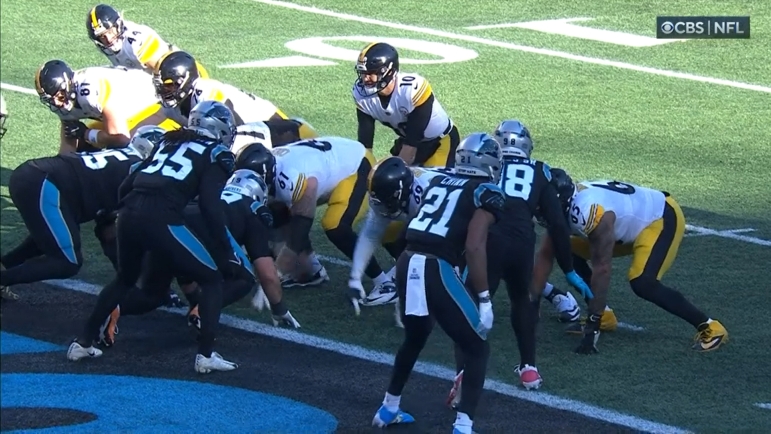 “We’re never happy unless it’s perfect,” Canada said as tweeted by The Trib’s Chris Adamski. “Strive for perfection, settle for excellence. We’re trying to do that. Credit to [OL Coach Pat Meyer] and the linemen to keep going, keep going, keep going. We’re not where we want to be yet but we’re getting better.”

Matt Canada on the improvement of the Steelers o-line from the preseason to now pic.twitter.com/fvwDvLMJiR

Getting better is certainly an understatement. Coming into the season, the offensive line was seen as the team’s biggest liability. They experienced growing pains throughout the season but are in a far better place now. Health has played a key factor in the group, Pittsburgh’s starting five remaining intact from start to finish. A young group under a new o-line coach, left tackle Dan Moore Jr. has grown throughout his career while free agent additions in center Mason Cole and right guard James Daniels have adjusted to Meyer’s system.

The line is a big reason for the run game’s improvement. They’re coming off their most impressive showing of the season, a 198-yard performance against the normally tough Baltimore Ravens’ defense. A unit missing stud DL Calais Campbell but even with that caveat, an almost 200-yard game is remarkable and the team’s best output in 25 years. Better run blocking has allowed the Steelers’ offense to form an identity, the building blocks to a successful unit that can score points. Pittsburgh still isn’t putting up large numbers on the board but they’re controlling the clock and playing keep-away from the opposing offense, letting them win low-scoring affairs.

Pittsburgh’s entire starting five is under contract for 2023 and all are expected to at least be on the roster entering camp. Perhaps the team looks for an upgrade at left guard over Kevin Dotson though his play has evened out over the past month. Moore isn’t going to be an All-Pro left tackle but unless the team has the chance to draft one, an unlikely scenario, he’ll likely return to protect Kenny Pickett’s blindside next season.

If there is one area along the line that must be addressed, it’s depth. Pittsburgh’s backups are shaky, the team relying on Jesse Davis, Trent Scott, J.C. Hassenauer, and Kendrick Green. The unusually good luck the Steelers have experienced has made the lack of depth a non-issue. But the odds of them getting through next season just as healthy is low. Adding a veteran tackle, a Joe Haeg-type player, in free agency would be wise and drafting a young interior lineman later i the draft also wouldn’t be a bad idea. Now it’s a question of if Canada will be part of that group or if the organization will have a new OC next year.