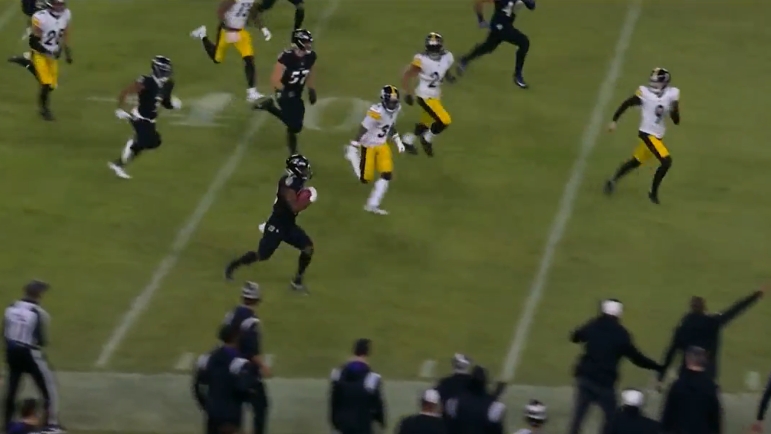 It felt like watching the Steelers’ young offensive stars grow up in front of our very eyes Sunday Night, driving 80 yards in a little over three minutes to score the game-winning touchdown with only 56 seconds left on the clock.

While the offense had similar heroics the week before against the Las Vegas Raiders, this one against their AFC North Rival in Baltimore simply means more.

Not to get lost in the shuffle was the dominant second-half performance of this Pittsburgh defense. After allowing 10 combined points on the Baltimore drives that sandwiched the halftime break, they were lights out. They had to be. Going down 13-3, to make it a two-possession lead, felt like the game very well may be over. Those feelings of gloom weren’t misguided either. According to ESPN’s Brooke Pryor, the Steelers were 0-7 when trailing by double digits and one of only seven teams in the NFL not to have a comeback of that magnitude this season.

The Steelers’ offense began to immediately chip away at the Ravens’ lead in the second half with two-straight field goal drives of their own, cutting the lead to 13-9.

But just when it felt like the Steelers were finally gaining some steam, a special teams blunder made it feel like it was coming crashing down. On the kickoff, Ravens return man, Justice Hill, was able to slip past tackle attempts by both Derek Watt and Connor Heyward to break to the outside for an explosive return all the way to the Pittsburgh 40-yard line.

Tune in on NBC! pic.twitter.com/15aSjIMNcY

The Ravens’ sideline was rightfully fired up and the Baltimore crowd was back into the game. As a Pittsburgh fan, there was nothing to do but roll your eyes as the first half was filled with “one step forward, two steps back” moments that were keeping the Steelers from taking control of this pivotal game.

Against the #Ravens, where every point matters even more than usual, the #Steelers have:

With only nine and a half minutes left in the game and the Ravens already back on the brink of field goal range, the feeling was that the defense simply could not allow any points in order to win this game.

They stepped up in a huge way.

On first down, the Ravens evidently have not yet learned that leaving the reigning NFL Defensive Player of the Year, TJ Watt, unblocked on the backside of runs is a bad idea. He was able to fly in, with the help of Cam Heyward, to bring down JK Dobbins for a two-yard loss.

The play backed the Ravens up and further muddied the waters of being in field goal range, even with Justin Tucker on the Baltimore sidelines.

On second-down, TJ Watt was in the backfield again slipping through multiple chips from Ravens and getting quarterback Tyler Huntley uneasy, throwing incomplete.

On third down, the main focus was obviously to not allow a conversion, but the secondary focus was to either drive the Ravens back further or not allow any yards to keep John Harbaugh’s fourth-down decision much more difficult.

Looking at the Ravens’ play call, even with Huntley throwing hot, it seemed like they were trying to get a simple completion and safely get into field goal range.

Terrell Edmunds had other plans. He took the blitzing Arthur Maulet’s man running a “hot” slant and laid the perfect hit on the Ravens’ tight end that made the ball pop loose.

The play was huge and Harbaugh took the conservative route playing the field position game, choosing to punt the ball away instead of attempting a 59-yard field goal with Tucker. It would be the last time Baltimore would take a snap in Pittsburgh territory for the rest of the game.

Not allowing a single yard after a potentially game-changing kick return, might not be remembered like the Kenny Pickett-led game-winning drive, but it was a pivotal reason in making the heroic moment possible.