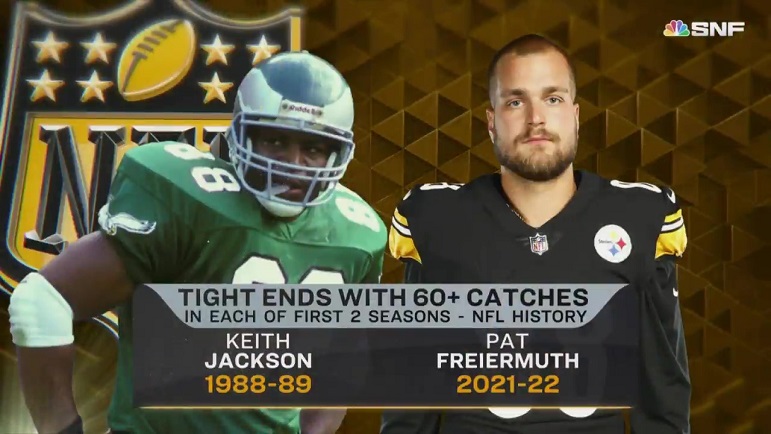 When the Pittsburgh Steelers selected tight end Pat Freiermuth out of Penn State in the second round of the 2021 NFL Draft, the belief was that the Steelers were getting a legitimate dual-threat tight end to help hold down one of the more important positions offensively for years to come.

While Freiermuth has had his struggles as a blocker in the NFL, there’s no denying just how good he’s been as a receiving option in the passing game through his first two seasons in the NFL.

He’s quickly become a go-to option in the passing game the last two seasons for former quarterback Ben Roethlisberger and current guys in rookie Kenny Pickett and backup Mitch Trubisky. On Sunday Night Football against the Baltimore Ravens, he showed once again why he’s a go-to weapon thanks to his sure hands, finishing with three catches for 36 yards, leading the Steelers on the night while making some key catches down the stretch.

Steelers rookie QB Kenny Pickett showing his athleticism and ability to play out of structure on this big throw to Pat Freiermuth.

The first-round pick out of Pitt has shown an ability to extend plays this season. pic.twitter.com/9RyLlAMthD

Freiermuth’s first catch of the night though moved him into rare company with former NFL tight end Keith Jackson.

On a second and seven from the Pittsburgh 28-yard line, Freiermuth caught a 6-yard pass from Pickett, giving him his 60th reception of the season, joining Jackson as the only tight ends in NFL history to record 60+ receptions in their first two seasons in the league. In the history of the NFL featuring some massive names at the tight end position like Travis Kelce, Rob Gronkowski, Antonio Gates and even Tony Gonzalez, only Jackson and Freiermuth stand alone with 60+ receptions in their first two seasons.

As a rookie, Freiermuth finished with 60 catches for 497 yards and seven touchdowns, serving as a key redzone weapon for Roethlisberger. This season though, Freiermuth has emerged as that true downfield weapon for the Steelers and has provided splash after the catch. With one game remaining in the 2022 regular season, Freiermuth sits at 63 receptions for 732 yards and two touchdowns.

According to Pro Football Focus’ grades, Freiermuth has taken a sizable step forward offensively. On the year, Freiermuth sits at a 77.8 overall grade, good for fourth overall at the tight end position just behind the likes of Kelce, George Kittle, and Mark Andrews. That 77.8 overall grade includes an 81.3 receiving grade.

Both of those numbers are sizable improvements over his rookie season grades of 72..3 overall and 74.8 receiving.

Joining company with Jackson is pretty significant for Freiermuth overall. Jackson spent 10 seasons in the NFL with the Eagles, Miami Dolphins and Green Bay Packers, earning three first-team All-Pro accolades, one second-team All-Pro honor and six trips to the Pro Bowl. He also helped the Packers win Super Bowl XXXI and finished his career with 441 receptions for 5,283 yards and 49 touchdowns.

Those numbers average out to 44 receptions, 528 yards and 4.9 touchdowns per season from Jackson. Through two seasons (with one game to play) Freiermuth is averaging 61.5 receptions for 614.5 yards and 4.5 touchdowns. Pretty solid pace to be on for Freiermuth, especially in an era that is more prolific from a passing standpoint.