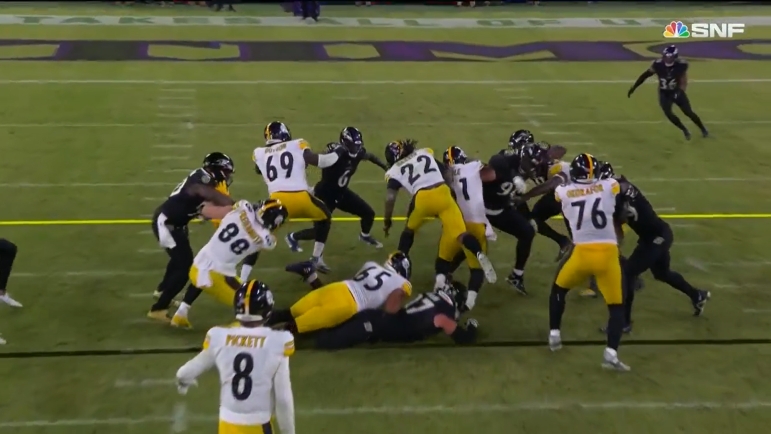 After falling to 2-6 entering the Week 9 bye following a 35-13 beatdown by the Philadelphia Eagles, the Pittsburgh Steelers were a sinking ship in what appeared to be a lost season.

The bye came at a perfect time though as the Steelers corrected course and went on a 6-2 run after the bye to reach 8-8 on the season and sit within one win (with some outside help) of getting into the AFC playoffs once again, which would cap off a rather remarkable turnaround in a year of transition for the franchise.

That post-bye run can be attributed to many things, such as rookie quarterback Kenny Pickett’s emergence, a star-studded defense getting healthy and making plays down the stretch, and the Steelers finding a running game overall.

For CBS Sports’ Jeff Kerr, the run game’s emergence in Pittsburgh into one of the top rushing attacks in football the last two months is the biggest reason the Steelers find themselves in the position that they’re in now, and the Week 17 performance on the road against the Baltimore Ravens on Sunday Night Football was the latest example of that.

Against Baltimore, the Steelers rushed for 198 yards, marking the second-highest output of the season behind the 217 the Steelers rushed for in the Week 10 win over the New Orleans Saints. Second-year running back Najee Harris and rookie undrafted free agent Jaylen Warren had great success on the ground, becoming the first running back tandem in Pittsburgh to have 75+ yards in the same game since Le’Veon Bell and LeGarrette Blount in 2016.

“Pittsburgh’s run game has not been as good as in past years, yet found a way to shine against a Baltimore run defense that allowed 87.5 yards per game (third in the NFL).  Najee Harris and Jaylen Warren combined for 187 yards and averaged 5.5 yards per carry,” Kerr writes regarding the Steelers run game for CBSSports.com. “The 198 rushing yards were the most for the Steelers since Week 10 and the most Baltimore has allowed in any game this season. Pittsburgh has averaged 141.8 rush yards per game over the last six games, a huge reason why the Steelers are still in the playoff mix heading into the final week.”

Since the bye week, the Steelers’ rushing output has been rather impressive. In the eight games, the Steelers have put up performances of 217, 172, 154, 156 and then the 198-yard performance against the Ravens.

After struggling to run the football early in the season, the offensive line that was much-maligned throughout the offseason, training camp and preseason, has gelled nicely in the second half of the season.

The interior of the offensive line featuring Kevin Dotson, Mason Cole and James Daniels has started to take over games at the point of attack in the run game, opening up significant holes for Harris and Warren, which has allowed the Steelers to stay balanced offensively, control the football and wear defenses down.

That’s largely the style of football the Steelers wanted to play this season, it just took them some time to find their footing in that area. Now, solidified in the trenches and really leaning in on the running game, the Steelers have found an identity offensively and are on the cusp of the playoffs.

While it is a bit crazy to think this team could make a run, there’s one thing consistent when it comes to the NFL and playoff runs: running the football well and playing great defense — two things the Steelers are doing at the moment.