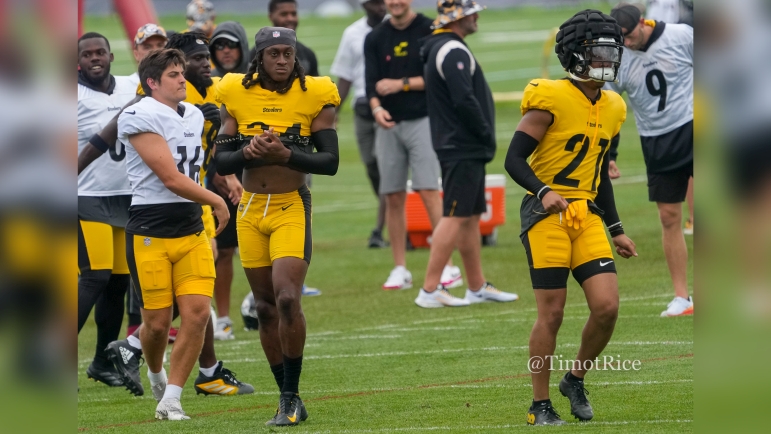 Some good news to start off your Saturday morning. Several Pittsburgh Steelers players took toys and their support to Kelly & Nina’s Daycare in McKees Rocks, the same daycare Buffalo Bills’ safety and Pittsburgh native Damar Hamlin has supported and raised money for.

Hamlin collapsed during Monday night’s game against the Cincinnati Bengals and had to be revived on the field by the quick and heroic work of medical staff, chiefly Bills’ assistant athletic trainer Denny Kellington, who performed CPR that helped save Hamlin’s life. Since, the football community has shown an outpouring of support for Hamlin, raising over $8.1 million for his Chasing M’s Foundation that helps sponsor toy drives and supports places like the Kelly & Nina Daycare. Nina is Hamlin’s mother and works there as a director.

Hamlin has made great strides in his recovery, now breathing unassisted and talking with family and Facetiming with teammates. For Tre Norwood, hearing that news was a weight off his shoulders.

“First I am walking around with a big smile…that’s a huge step that he is progressively getting better.”

Norwood told Varley he and Hamlin have become friends over the last two years given their Pittsburgh ties and the fact they entered the league together as part of the 2021 draft class. Another Steeler who knows Hamlin well is CB Levi Wallace. Last season, they were teammates in Buffalo and spent plenty of time together in meetings and on the practice field. For Wallace, supporting one of Hamlin’s causes was a no-brainer decision.

“I’ve seen how hard he works on and off the field and so anything that I could do here in Pittsburgh, I’m here to do.”

In addition to bringing toys, Steelers’ teammates also brought books and supplies to support the daycare.

Despite the tragedy of the moment, it’s heart-warming to see the NFL rally from all corners of the globe to support Hamlin and have some good come out of an otherwise scary situation. Two of the most dedicated fanbases in football, Buffalo and Pittsburgh, were the most-closely impacted by Hamlin, and both have shown a lot of love in words, in support, and in resources since Monday night.

Check out Varley’s entire article for more quotes from players and some great photos of the group delivering toys and supplies.