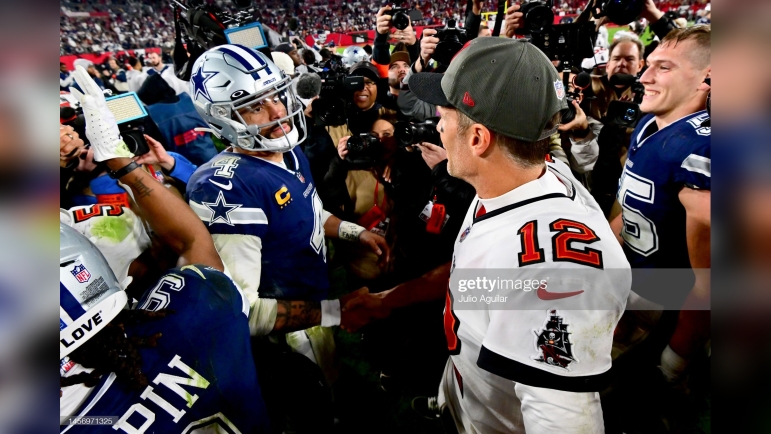 The Pittsburgh Steelers, in spite of their recent lack of success in the postseason, remain one of the dominant franchises of the Super Bowl era. Having been largely terrible up to that point, for example, they recently became the first team to record 500 wins since the NFL-AFL merger.

And even though they haven’t won a postseason game since 2016, the fact is that nobody has won more games in the postseason than they have since the dawn of the Super Bowl era, starting in 1966. They have won 36 postseason games since then. At least until last night, the only company they shared was the New England Patriots.

The Dallas Cowboys’ victory in yesterday’s game, however, adds them to the list, so now the Steelers, Patriots, and Cowboys share the NFL Super Bowl-era record for the most postseason wins at 36. Curiously, if the Tampa Bay Buccaneers had beaten the Cowboys instead, then it would have given quarterback Tom Brady his 36th postseason win individually, thus giving him as many postseason wins as a single person as any franchise has in the Super Bowl era.

If you want to go by the NFL-AFL merger, however, then the Cowboys are still one game behind, because the merger did not take place and give berth to the ‘common era’ until 1970, in the year of the fifth Super Bowl. Dallas’ first postseason victory occurred in 1967.

By either metric, the San Francisco 49ers can become the next team to join the ranks, as they currently have 35 postseason victories since 1970. They can come up with number 36 next week if they defeat the Cowboys. If not, then Dallas will get number 37 and set a new Super Bowl-era record for postseason wins.

The Steelers will not have another opportunity to retake sole possession of the record until next year, of course. They narrowly missed the postseason this past season, even if few had any confidence that this team would be able to win against a high-seeded opponent.

Pittsburgh does have an interesting roster right now that is trending in the right direction, but can they really play to a level that can be competitive in the postseason so quickly? So much of that rides on the development of 2022 rookie quarterback Kenny Pickett.

Of their 36 postseason wins, 14 of them belong to Hall of Famer Terry Bradshaw, who of course won four Super Bowls in the 1970s. Ben Roethlisberger just recently retired one behind him with 13 postseason victories, having played in three Super Bowls and won two. Kordell Stewart’s five postseason wins come next, while three belong to Neil O’Donnell. The one remaining victory goes to Bubby Brister, who in 1989 authored the team’s only postseason win between 1985 and 1993.