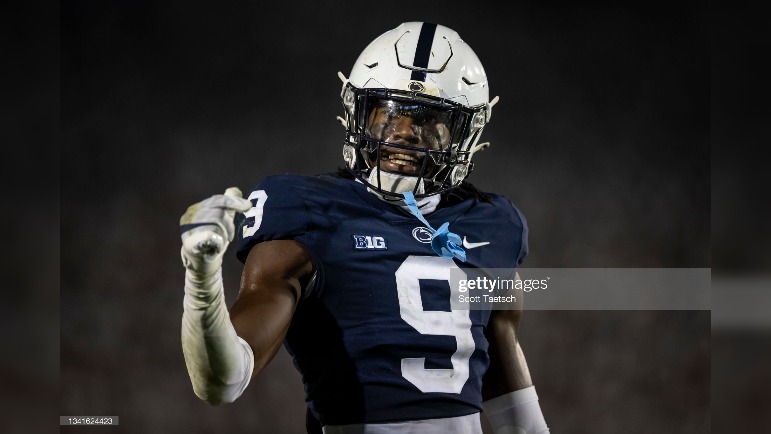 With the 2022 NFL season winding down ahead of conference championship weekend, 28 of the 32 teams are fully in offseason mode at this point, including the Pittsburgh Steelers. With offseason mode comes free agency speculation and — my personal favorite — mock draft season.

Holding three picks in the top 50 of the 2023 NFL Draft, this draft cycle is shaping up to be a potentially transformative one for the black and gold under new GM Omar Khan and assistant GM Andy Weidl.

Holes along the defensive line, inside linebacker, and cornerback, as well as depth concerns elsewhere throughout the roster are present, but one seems to stand out above the rest — at least when it comes to the national media. That would be the hole at cornerback.

ESPN NFL Draft guru Mel Kiper Jr. has the Steelers taking a big swing at that position in his first mock draft of the season, which dropped Wednesday morning. In it, Kiper Jr. pairs the Steelers with a familiar face, selecting Penn State cornerback Joey Porter Jr.

“Like father, like son in Pittsburgh? The Steelers drafted linebacker Joey Porter in the third round in 1999, and they have a need for his son in 2023,” Kiper Jr. writes regarding the Steelers selection. “Porter is an aggressive 6-foot-2 corner who was a three-year starter for the Nittany Lions. He picked off just one pass in his career, but he had 11 pass breakups in 2022, so he gets his hands on the football when it’s headed in his direction. The Steelers likely will be hoping one of the top offensive tackles drops to them, and they could also target a defensive tackle.”

While it’s still rather early in the draft process overall, Porter Jr. has been a common name connected to the Steelers not only due to the position he plays, but due — most importantly — to the bloodlines he shares. Of course, Joey Porter played eight seasons with the Steelers, helping them win Super Bowl XL over the Seattle Seahawks.

In his eight seasons with the Steelers, Porter recorded 60 sacks and later went on to coach under Steelers head coach Mike Tomlin as the outside linebackers coach starting in 2014 before being fired in January 2019.

Joey Porter Jr. YOU are a Pittsburgh Steeler. pic.twitter.com/1tQsgSDNgv

Porter Jr. would certainly plug a hole for the Steelers at cornerback. Though there are some fair concerns overall about his lack of production in terms of interceptions, Porter Jr. got his hands on the football quite a bit in 2022, breaking up 11 passes, playing a true shutdown role for the Nittany Lions’ defense.

He’s a long, physical cornerback that excels against the run and can handle himself well in press coverage, but he’s best suited to play against bigger, physical receivers as he had struggles with the quick-twitch type weapons in college.

Here’s what Steelers Depot’s own Jonathan Heitritter had to say about Porter Jr. in his draft profile of the Penn State product:

“Joey Porter Jr. is a long corner prospect that best excels when he can play close to his competition in press man situations. His length can be his greatest asset as he can contest passes in short areas as well as challenge bigger receivers in the red zone. He has experience playing in off man as well as zone coverage and can be used as a blitzer coming off the edge.

“Still, Porter lacks great twitch and fluid transition skills at the position, being slow to react at times to route stems in front of him which leads to getting too hands-on with WRs. He has done a good job to clean up his tackling but still needs to improve his awareness and lateral movement skills to be in better position with receivers throughout the entire route.”

Heitritter has Porter Jr. graded as a late Day 1, early Day 2 prospect, so No. 17 overall would be a bit rich for the Penn State product, who had just one interception in his career at Penn State. But based on the bloodlines, size and overall physical traits, it wouldn’t be surprising to see him go earlier than some may expect.