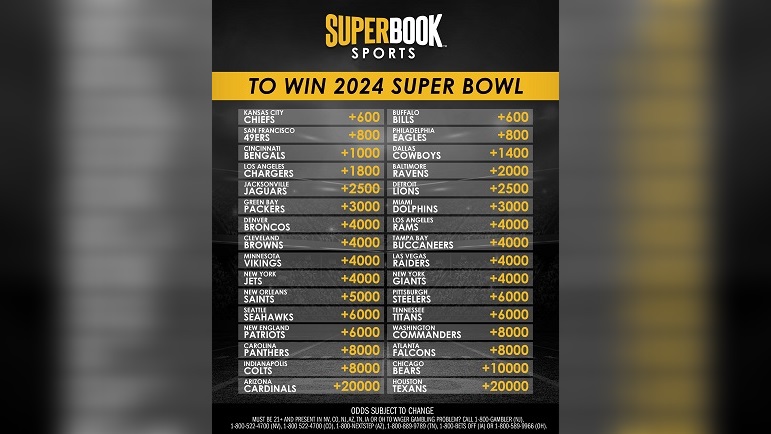 While the NFL has yet to crown a champion for the 2022 season, odds for the 2023 champion are already beginning to circulate quite heavily. On Tuesday, SuperBook at the Westgate Las Vegas released their latest Super Bowl winner odds for the 2023 season and they show the Pittsburgh Steelers as essentially longshots when it comes to them winning a seventh Lombardi Trophy.

The Steelers are correctly listed at +6000 odds to win Super Bowl LVIII at Allegiant Stadium on February 11, 2024. That’s 60/1 odds if you want an easier conversion. Only seven other teams currently have longer odds than the Steelers do right now at the SuperBook at the Westgate Las Vegas. Those seven other teams are the Washington Commanders, Carolina Panthers, Atlanta Falcons, Indianapolis Colts, Chicago Bears, Arizona Cardinals and Houston Texans.

There are four other teams that currently have the same odds as the Steelers do and they are the Seattle Seahawks, Tennessee Titans and New England Patriots.

The current co-favorites to win Super Bowl LVIII are the Kansas City Chiefs and the Buffalo Bills at 6/1 odds. Those two teams are followed by the San Francisco 49ers and Philadelphia Eagles and both are listed at 8/1 odds.

Why are the Steelers considered such longshots right now? That’s probably related mostly to the team’s offense in addition to the decision being made to retain offensive coordinator for the 2023 season. Betting confidence in the Steelers being better than their 9-8 record in 2022 probably won’t be high from now until the 2023 regular season gets underway.

The Steelers’ last playoff win came in the 2016 NFL season.

Obviously, there is still a full offseason to go for all NFL 32 teams and that includes free agency and the draft taking place. Even so, it will be surprising if the Steelers wind up seeing odds as low as 40/1 by the time they start their 2023 regular season.

With this season’s Super Bowl getting closer, it will be interesting to see how much these Tuesday odds for Super Bowl LVIII from SuperBook change right after the NFL crowns the Super Bowl LVII winner.