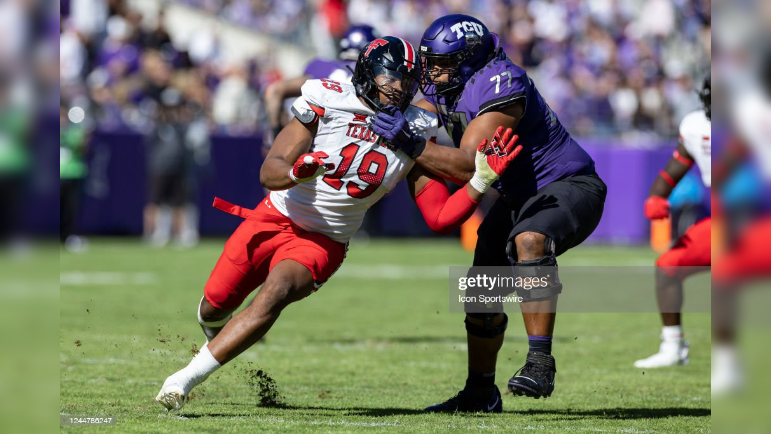 Just a few short months ago, the Pittsburgh Steelers held a top 5 pick in the 2023 NFL Draft, which had them in position to land a potential franchise-altering prospect at the top of the draft.

A 6-2 (and counting) run later, the Steelers are currently picking in the middle of the first round and could be coming off of a second straight playoff appearance. Entering the offseason, the Steelers have some key pieces to re-sign before free agency, and can free up some cap space with smart roster cuts of players making far too much money with very little role.

Of course, what the Steelers could target in the first round of the 2023 NFL Draft could come down to what holes they are or aren’t able to plug in free agency, but for Football Outsiders’ Mike Tainer, they’ll do what they seemingly always do: take a pass rusher in the first round.

“Wilson is built like a member of the Justice League and defeats blockers with a battery of rip and swim moves,” Tainer writes regarding Wilson. “He’s a little high-cut and not twitchy at all, but he wins with tremendous upper-body strength, and he picks up sacks with his second move and lots of tackles in pursuit.”

Yea, this is what you get ⤵️ pic.twitter.com/X81Vx6TU6x

Wilson, 6-feet-6, 275 pounds,  has really burst onto the scene this season for the Texas Tech Red Raiders, recording a Big 12-high 14.5 tackles for loss and finished second in the conference in sacks with 7.0. His impressive 2022 season saw him be named a First-Team All-American and a First-Team All-Big 12.

In 35 career games with the Red Raiders and Texas A&M Aggies (Wilson transferred to Texas Tech after the 2019 season and 5 games with the Aggies), Wilson recorded 121 tackles, 32 tackles and 17.0 sacks.

While the Steelers don’t exactly have that high of a need at outside linebacker currently, the Steelers will need to address OLB3 at some point in free agency or the draft, considering Malik Reed will be a free agent and likely won’t be back.

Highsmith is in line for a significant extension as well this offseason, so grabbing an edge in the first round would be a real surprise for the Steelers. However, new GM Omar Khan has stated in the past that his philosophy isn’t all that different from other teams: protect the quarterback and get guys that can rush the passer.

That’s largely why Tainer paired Wilson with the Steelers.

“They’re the Steelers. They draft edge rushers in the first round. It’s what they do,” Tainer writes. “They could use an upgrade on the offensive line, reinforcements at wide receiver, more talent in the secondary. They will draft a toolsy edge rusher. The end.”

i dont need to see anymore of tyree wilson pic.twitter.com/67OUajizvn

Though it seems like that’s what the Steelers do, they’ve drafted just three outside linebackers in the first round since 2005, that being Watt, Bud Dupree and, of course, Jarvis Jones.

The Steelers have been able to find significant value in the middle rounds at the position, like Highsmith, LaMarr Woodley, Jason Worilds, and potentially DeMarvin Leal. Still, the need for OLB3 is a big one, though not as large as help along the defensive line, cornerback, and receiver.

Wilson would be quite a fun add overall as he’s a physical specimen, but considering who was on the board in Tainer’s mock draft — Georgia T Broderick Jones, USC WR Jordan Addison, Mississippi State CB Emmanuel Forbes, and Baylor DT Siaki Ika — it was a rather interesting and puzzling selection overall.