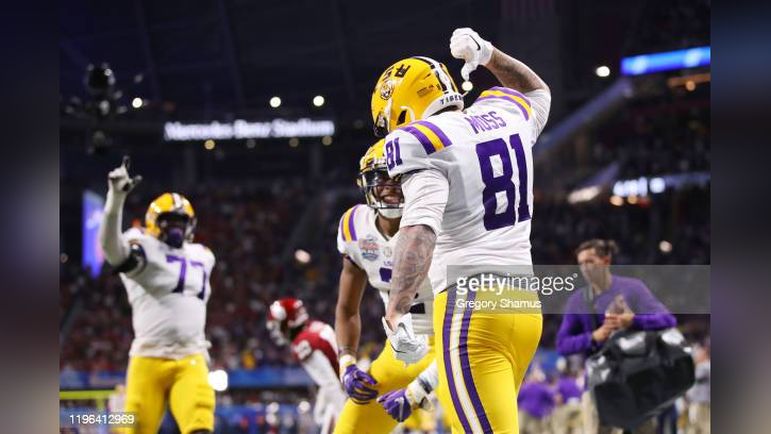 The Pittsburgh Steelers tried out a pair of players Tuesday including one with some notable pedigree and bloodlines. According to the NFL’s official transactions report via PFN’s Aaron Wilson, the team held tryouts with TE Thaddeus Moss and OG Mike Panasiuk.

Moss is the most notable name of the two. The son of Hall of Fame WR Randy Moss, he began his college career at NC State before transferring to LSU for 2017 through 2019 seasons. In 2017, he worked under then Tigers’ OC Matt Canada, now in the same role with the Steelers. Canada was also at NC State in 2015, Moss’ senior year of high school, so it’s likely Canada helped recruit Moss to the Wolfpack though Canada had left for Pitt for Moss’ 2016 season.

He went undrafted in 2020 and signed with Washington. Carried on IR throughout his rookie season, he was waived the following spring and claimed by the Cincinnati Bengals. He never appeared in a game with the team and was waived from the Bengals’ practice squad in early September of 2022.

Once thought to be a draftable player, Moss has tweener size at 6017, 250 pounds and lacks top-end athleticism. Coming out of college, he also had medical concerns and in our scouting report, we noted he was a difficult and messy evaluation. Here’s what we wrote at the time.

“Just one year to go off of and his production wasn’t sterling either. He’s had an…interesting football career. Five different high schools, two different colleges, only one year of actual production. That isn’t disqualifying but there’s a lot for scouts to try to dig around and find out when it comes to the interview process. Medicals with that foot injury will have to check out too; he had a second surgery in 2018 because the initial procedure didn’t heal it properly. What are the long-term effects? Could vary from team to team.”

You can check out our full report on him below.

Panasiuk played for Michigan State from 2016 to 2019. A defensive tackle in college, he recorded 95 tackles over his Spartans’ career, picking up five sacks and two interceptions. His best year came his senior year, recording 34 tackles (ten for a loss) with three sacks and an interception. He’s spent time in his NFL career with the Carolina Panthers. The transactions log lists him as a guard so he’s presumably changed positions.

This isn’t the first time the team worked him out. They also brought him in in late July but did not sign him.

We’ll see if either player gets signed later in the week. It’s also possible they were brought in now as potential futures contracts options to the team’s offseason roster whenever their season ends.