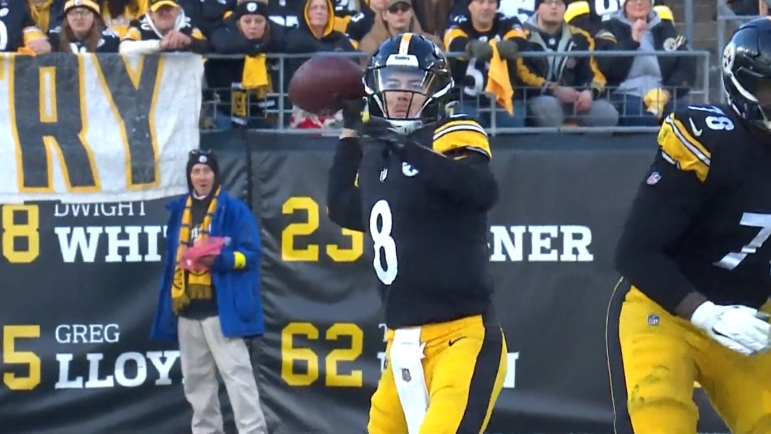 Entering an offseason in which the roster of the Pittsburgh Steelers has a lot of holes after going 9-8 on the season, one position that doesn’t have a hole whatsoever appears to be the quarterback position.

After selecting quarterback Kenny Pickett at No. 20 overall in the first round of the 2022 NFL Draft just a month after signing veteran free agent Mitch Trubisky to a two-year deal, the Steelers are seemingly in a good spot at the most important position in football. A young signal caller who impressed down the stretch and looks like the future franchise QB, and a veteran quarterback on a relatively affordable deal who knows the system and stepped in to win games in a pinch.

All teams clamor for that at the quarterback position. Seems like the Steelers have it — again.

All FOUR of Kenny Pickett's game-winning drives of his rookie season 🖤💛 pic.twitter.com/8GsqYGyijD

Pro Football Focus’ Trevor Sikkema seems to agree, placing the Steelers 17th overall in his Quarterback Needs Rankings Tuesday, leading off the tier of “Things to Like” ahead of the Detroit Lions and New York Giants.

“There were some concerns about first-round pick Kenny Pickett not being able to beat out Mitch Trubisky for the starting job to open the season, but after eventually becoming the full-time starter, Pickett played well, especially down the stretch,” Sikkema writes regarding the Steelers in his QB Needs rankings. “Since Week 12, he earned a 90.3 overall grade with an 88.5 passing grade. Though it was just a six-week span, it was impressive to see.”

After taking over in Week 4 at halftime against the New York Jets, Pickett struggled to protect the football, throwing three picks in the second half in a loss, and then turning the football over consistently from Week 5-8 before entering the Week 9 bye with a chance to reset.

Coming out of that bye week, Pickett looked like a much different quarterback. He was smart with the football while remaining aggressive at times, made big-time throws and never blinked in clutch situations, leading four game-winning/comeback drives in the fourth quarter, tying the NFL record for a rookie.

While he still needs to get better at taking shots down the field and hitting on those shots, as well as cleaning up some of his pocket presence struggles, he certainly looks the part and has created a sense of excitement entering the 2023 season at the position for the Steelers.

With Trubisky, he remains under contract for $8 million in 2023. Though the Steelers could cut him and save a bunch of money, that would create a hole through their own doing. With Pickett under a rookie deal and relatively cheap, paying Trubisky that type of money to be the backup isn’t a bad idea.

He knows the system, knows the team overall and is comfortable within the offense overall. He showed in games coming off the bench against the Tampa Bay Buccaneers and Baltimore Ravens that he can do things in relief to keep the offense competitive, though the Ravens game came crashing down with three interceptions.

Add in the fact that he seemingly has a strong relationship in the quarterback room with Pickett and QB coach Mike Sullivan, it makes far too much sense to keep him around for the 2023 season as insurance behind Pickett. The young quarterback already has two concussions early in his career, so having an experienced quarterback who knows the system behind him is the smart move, one the Steelers likely will make.

Just some Mitch Trubisky throws for your timeline. #Steelers pic.twitter.com/5bsH9mR2PI

It’s certainly not the best quarterback situation in the NFL, but it’s a strong one overall for how the Steelers want to play and how they want to build a roster moving forward. Of course, if Pickett continues to take steps forward and become the guy the Steelers — and many within the fanbase — believe he can be, that quarterback situation improves all the more moving forward.