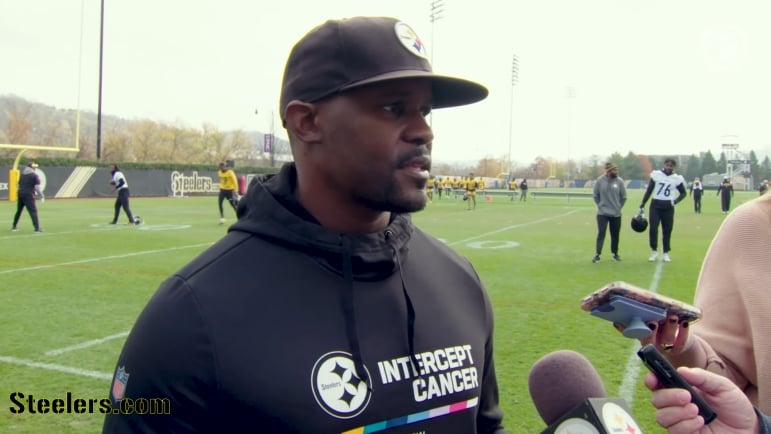 The tenure for Pittsburgh Steelers Senior Defensive Assistant and LBs coach Brian Flores could be over after just one season.

Flores, who the Steelers hired in mid-February to the staff under head coach Mike Tomlin, could be a hot commodity in the coaching carousel set to begin soon. According to Tomlin, who spoke to the media Monday in his season-ending press conference to wrap up the 2022 season, revealed to reporters that he’s already received a request from one organization to interview Flores for a coordinator position, presumably a defensive coordinator job.

“I’ve already received a request for Brian Flores, but there have not been any significant conversations among the staff about that,” Tomlin stated to reporters Monday, according to video via the Steelers official YouTube page.

While Tomlin wouldn’t reveal the team, ESPN’s Adam Schefter reported Monday shortly after Tomlin’s comments that the Cleveland Browns reached out to the Steelers to request permission. The Browns fired defensive coordinator Joe Woods Monday following the 28-14 loss to the Steelers.

Prior to landing with the Steelers, Flores was the head coach in Miami, leading the Dolphins to a 24-25 record in three seasons as the head coach, including two seasons in which he led the Dolphins back from early-season struggles to be in contention for the playoffs before being fired.

Upon his firing and subsequent failure to land the New York Giants’ and Houston Texans’ head coach jobs, Flores sued the team and the league for a wrongful firing and hiring discrimination practices, accusing Dolphins’ owner Stephen Ross of paying him to lose games. That legal battle remains ongoing.

Prior to the news Monday regarding the request from Cleveland to speak to Flores, Sports Illustrated’s Albert Breer speculated that Flores could be in the running for the head coaching vacancy in Houston again after the Texans fired Lovie Smith after one season Sunday night, the second straight year the organization has fired a head coach after one season.