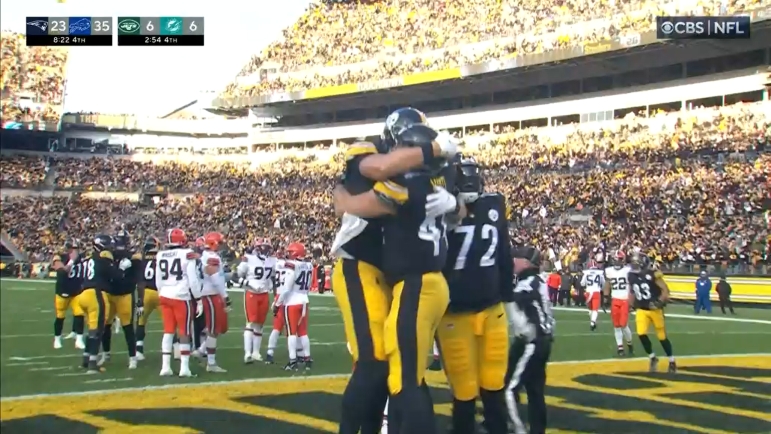 10 weeks ago, it seemed unfathomable that the Pittsburgh Steelers Week 18 game would be meaningful. But with a strong second half of the season, the Steelers needed to beat the Cleveland Browns, have the New York Jets beat the Miami Dolphins, and the Buffalo Bills beat the New England Patriots to sneak into the playoffs. While the Steelers took care of business with a 28-14 win over the Browns, the Dolphins beat the Jets 9-6 and the Steelers missed the playoffs.

The Browns received the ball to start the game, and on the first play of the game, QB Deshaun Watson checked it down to RB Nick Chubb who picked up 19 yards, and then Chubb gained another five yards on a second reception on the next play. A penalty against OT James Hudson cost the Browns 10 yards, and on 3rd and 10, Watson was incomplete and the Browns would punt. P Corey Bojorquez’s punt went just 35 yards to the Pittsburgh 21, and it was returned 12 yards to the Pittsburgh 33 by WR Steven Sims, which is where the Steelers would start their opening drive.

RB Najee Harris ran for eight yards on each of his first two plays, and then on 1st and 10 he picked up another six yards. Two plays later TE Connor Heyward ran for six yards and a first down on 3rd and 1. A drop by WR Diontae Johnson and a loss of three by Harris on 2nd and 10 brought up 3rd and 13, but the Browns jumped offsides to make it 3rd and 8. On 3rd and 8, Pickett made a nice throw on the run and found Johnson who picked up yards after the catch for a 32-yard gain. Pittsburgh couldn’t get in on 1st and Goal from the two-yard line, gaining just one yard (although it looked like he scored), and Pickett was stuffed on a QB sneak on 2nd down. On 3rd and Goal, Harris fumbled while leaping for the end zone and the Browns recovered.

On first down, Chubb ran for 11 yards and a first down. A holding penalty after a 2nd down run cost Cleveland 10 yards, and on 2nd and 18, Watson hit WR Amari Cooper for a gain of 16. On 3rd and 2 though, RB Kareem Hunt couldn’t pick up the first and the Browns punted. The Steelers would take over at their own 29. On first down, it appeared Johnson fumbled and the Browns recovered, but it was ruled an incomplete pass. On second down, Sims ran for 16 yards and a first down. Pickett was sacked on the ensuing first down but LB Tony Fields was flagged for illegal contact. The Steelers couldn’t take advantage of the break, as they weren’t able to pick up another first down. P Pressley Harvin III boomed a 42-yard punt that was downed at the Browns’ 6-yard line.

A 38-yard reception to WR Donovan Peoples-Jones on first down was followed by a sack by T.J. Watt and Cam Heyward that brought the Browns into a 2nd and 15. The Browns wouldn’t pick up another first and they would punt. Bojorquez’s punt was a touchback.

A huge 45-yard gain by Harris on a first down screen was negated by an ineligible man downfield penalty and the Steelers would go three-and-out. Cleveland’s next drive would start at their own 29. On 3rd and 3, Watson went over the middle and hit TE Harrison Bryant for 14 yards to midfield. A holding penalty against LB Robert Spillane on 3rd and 10 gave the Browns and automatic first down and a new set of downs. The next play, Watson evaded a sack and dumped it off to Hunt for 14 yards and a first down. A 12-yard run by Chubb on 3rd and 1 was followed by a 10-yard touchdown pass by Watson to TE David Njoku and the Browns took a 7-0 lead after K Cade York’s extra point with 6:27 left in the first half.

The Steelers hit an explosive play on the first play of their next drive, getting a 23-yard completion to TE Zach Gentry. On 3rd and 5 from the Cleveland 47, Pickett went deep down the left sideline to Johnson and the Browns were flagged for pass interference at the Cleveland 36. RB Jaylen Warren would pick up a first down on a nice effort on a dump-off later in the drive. On the last play before the two-minute warning, Harris ran for no gain and the refs missed the two-minute warning coming before the snap. Pickett’s endzone shot to Johnson was incomplete on 2nd and 10, and on 3rd and 10 the Steelers were flagged for delay of game pre-snap. Pickett made up for the mistake by throwing a 31-yard touchdown to a wide-open WR George Pickens. Boswell’s extra point tied the game at 7-7 with 1:47 left in the first half.

On the second play of Cleveland’s next drive, CB Levi Wallace got his fourth interception of the season and he returned it three yards to the Pittsburgh 44. On first down, Pickett was incomplete to Johnson, but the next play he threw to Pickens down the left sideline for 24 yards and a first down. Pickens appeared to have another reception on the next play, but the play wasn’t reviewed. On the next play, Pickett scrambled for a one-yard gain to set up 3rd and 9. Pickett was incomplete on 3rd and 9 and Boswell made a 49-yard field goal to give the Steelers a 10-7 lead with 38 seconds left in the half.

That would be the score going into the half, and the Steelers would get the ball to start the second half. Najee Harris ran for five yards to open the second half, and then Warren ran for 22 yards and a first down. Harris gained 10 yards and a first down on the next play, and two plays later a six-yard reception by Johnson gave the Steelers a 3rd and 1. WR Gunner Olzsweski converted on the jet sweep, and the Steelers would get as far as the Cleveland 10 before the drive stalled out. Boswell came out and hit his second field goal of the game, giving the Steelers a 13-7 lead with 9:04 left in the third quarter.

The Steelers had the Browns facing a 3rd and 10 on their next drive, but Watson was able to scramble for 21 yards and a first down. Two plays later, Spillane sacked Watson and on third down, S Damontae Kazee picked off Watson and returned it 12 yards to the Cleveland 25. After an 11-yard run by Harris for a first down, the Steelers picked up another first on a 3rd and 3 completion by Warren that got just enough for the first. On 2nd and Goal from the 4, Harris ran for a four-yard touchdown and Boswell’s extra point put them up 20-7 with 3:12 left in the third quarter.

After an 11-yard first down run by Nick Chubb, Watson went deep to Amari Cooper and connected on a 36-yard completion down to the Pittsburgh 14. On 2nd and 7 from the Pittsburgh 11, DL Cameron Heyward sacked Watson but was called for a laughably bad roughing the passer penalty. A few plays later, Watson threw to Chubb for a touchdown that never should have happened. York’s extra point cut the Steelers’ lead to 20-14 with 10:11 to go in the fourth quarter.

Harris ran for a first down on the second play of the Steelers’ drive, and a few plays later the Pickett-to-Pickens connection came through with a 17-yard completion on 3rd and 10. On 3rd and 8 a few plays later, TE Connor Heyward made an impressive catch over the middle for a gain of 27 yards and a first down to the Cleveland 14. A few plays later, FB Derek Watt punched it in from a yard out and the two-point conversion to Johnson was successful and the Steelers took a 28-14 lead with 4:37 left in the game.

The Browns put together a long drive but weren’t able to score, and the Steelers ended the game with back-to-back sacks with Deshaun Watson.

The Steelers season ends at 9-8. It was a remarkable turnaround from a 2-6 start, but unfortunately, they’ll be watching the playoffs from home.