We are now well into the offseason when it comes to the Pittsburgh Steelers and with that, I plan to provide weekly updates when it comes to the team’s 2023 salary cap situation as we inch closer to the start of a new league year on March 15. This week’s Saturday update reflects the re-signing of one player to the team’s offseason roster this past week. That player re-signed was veteran wide receiver Anthony Miller.

As I reported this past week, Miller signed a one-year Veteran Benefit Contract that comes with a slightly reduced salary cap charge of $940,000. That contract puts Miller in the top Rule of 51 for March 15 as of now.

The Steelers now have 55 players under contract for the start of the new league year. The top 51 salaries of those 55 players equates to $220,497,584. The team also has a predicted March 15, dead money amount of $8,028,814 for 2023 as well, That dead money total includes cornerback Cameron Sutton as his current 2023 contract is scheduled to void in February. Also included in the top 51 cap charges for 2023 are the expected Proven Performance Escalator raises for outside linebacker Alex Highsmith and guard Kevin Dotson. In total, the Steelers Rule 51 number is $228,526,398.

Below is a table that reflects the team’s current salary cap snapshot for March 15 based on the 55 players currently under contract for that date. The table also includes estimated predicted cap costs the Steelers will have much further into the offseason. Additionally, possible future contract restructure savings are also included in the table of data.

The Steelers can obviously clear quite a bit of additional salary cap space via offseason contract terminations. Heading the list of players that could possibly have their contracts terminated this offseason is cornerback William Jackson III. Doing so would instantly create $12,176,471 in 2023 salary cap space prior to top 51 roster displacement taking place. 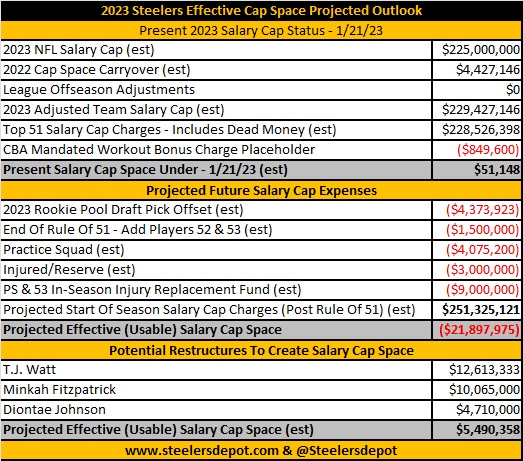