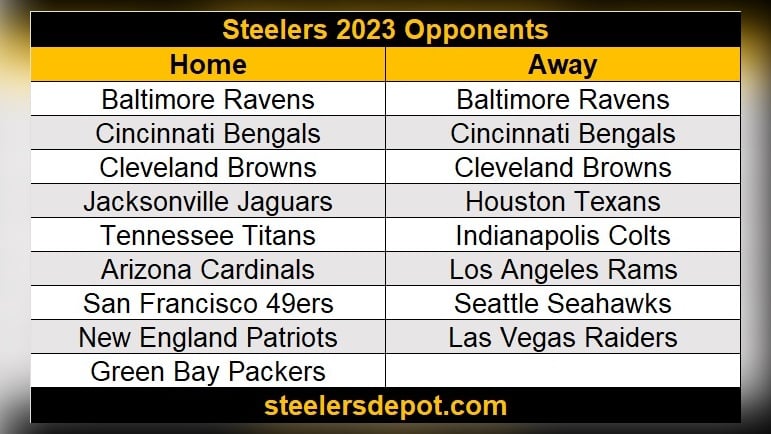 Now that all the Week 18 AFC games have been played, we now know all the teams the Pittsburgh Steelers will face during the 2023 regular season.

Week 18 obviously opened with us knowing 11 of the 14 teams the Steelers will face in 2023. Thanks to the NFL’s rotating schedule, we’ve known for a while now that the Steelers will play the AFC South and NFC West divisions in 2023, in addition to their usual six games against the three teams within their own AFC North division, the Baltimore Ravens, Cincinnati Bengals and Cleveland Browns. We’ve also known that they will play one team each from the AFC East, AFC West, and NFC North, based on where they finish within their own division.

With the Sunday night game now over with, we now know that the Steelers will also be playing the Green Bay Packers, New England Patriots, and the Las Vegas Raiders in 2023.

The Steelers finished third in the AFC North so that means they play the third-place teams in the AFC East, AFC West, and NFC North, their three unknown opponents heading into Week 18.

In 2022, the Steelers didn’t have to travel very far on road games but that won’t be the case in 2023 as they will play three times on the West Coast. The Steelers will play at Allegiant Stadium in Las Vegas for the first time in 2023. They will also make their second appearance at SoFi Stadium in Inglewood, CA in 2023 as well as they played the Los Angeles Chargers there in 2021. The Steelers will also play the Seahawks in to Seattle, WA in 2023 for the first time since 2015.

The times and dates for the Steelers 2023 schedule of opponents won’t be announced until sometime in either late April or the first half of May.