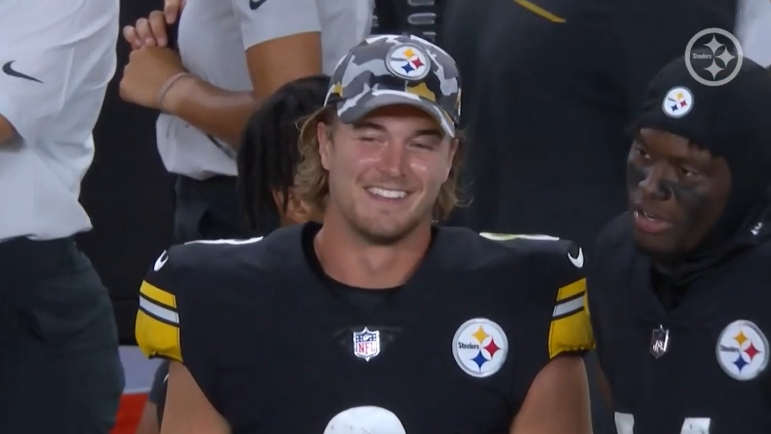 The Pittsburgh Steelers are coming off a 9-8 season where their young players played a substantial in the team’s overall success. Second-year RB Najee Harris posted his second-straight 1,000-yard rushing campaign and TE Pat Freiermuth took a step forward, becoming one of the better pass-catching TEs in the league. However, Pittsburgh benefitted greatly from their 2022 rookie class who were forced to contribute early and often, having the likes of QB Kenny Pickett, WR George Pickens, and RB Jaylen Warren become focal points on the offensive side of the football.

ESPN agrees, ranking the Steelers 10th overall in their 2022 Rookie Class Rankings based on total production according to Aaron Schatz and Alex Vigderman.

“Steelers fans will spend the next few years celebrating the Pickett-to-Pickens connection,” ESPN said. “Quarterback Kenny Pickett started for most of the season and put up a modest 51.4 QBR. Wide receiver George Pickens was more impressive, leading all wide receivers in Football Outsiders’ DVOA and DYAR metrics and finishing in the top 20 of ESPN’s new advanced receiver tracking metrics. The young offensive talent went further with undrafted running back Jaylen Warren, who gained 4.9 yards per carry on 77 carries, and tight end Connor Heyward, who caught 12 passes for 151 yards and a touchdown. The only rookie to have a regular role on defense was interior defensive lineman DeMarvin Leal, who played 11 games and started two.”

Kenny Pickett and George Pickens made an impact right away on the offensive side of the football, showing fans why they were Pittsburgh’s top two selections in the draft. While the numbers weren’t anything spectacular for Pickett, he did show signs of potentially becoming the team’s franchise QB with clutch game-winning drives late in the season against the Ravens and Raiders. Pickens has already established himself as one of the best deep ball receivers in the league, ranking near the top of the position in contested catch percentage.

Jaylen Warren proved to be the ideal complement to Najee Harris in the backfield, providing Pittsburgh with a reliable 1-2 punch in the ground game while Warren also provided the team a capable pass catcher out of the backfield and a consistent pass protector. Connor Heyward made the most of his limited opportunities as a former sixth-round pick, making some of Pittsburgh’s biggest plays of the year in the passing game while icing the Raiders’ game with a jet sweep carry for the first down.

Contrary to ESPN’s article, DeMarvin Leal played a fair amount on the edge this season for the Steelers in a pumped-up OLB role. A true tweener, it will be fascinating to see if Leal slims down and moves out to the edge permanently, or if he can hold his own inside in the coming years. The article also failed to mention LB Mark Robinson who got some run in the final few games of the season, making some key plays against the Ravens in Baltimore, but struggled at times against Cleveland in the finale as a promising, yet raw rookie linebacker.

While the production of this rookie class can’t match the same contributions of other classes including the Lions, Jets, and Seahawks, the Pittsburgh Steelers definitely found some difference makers in the 2022 NFL Draft. They provided us a glimpse of what could be this season, but now must take their respective games to another level and continue that ascension in production in 2023.